Turkey Trot 2019 - Another Year of Great Weather and Beautiful Smiles

The first thanks for a great day must go to the team of volunteers, especially those taking a leadership role and who just get better and stronger every year.  Directing and managing something as sprawling and complex as the Tallahassee Turkey Trot is a challenge to anyone regardless of that person’s health.  But turning Parky loose during such an event is the perfect opportunity for major disruption.

Perhaps I imagined this, but I don’t think so.  This year, starting with co-race director Mary Jean, I felt the comfort of many hands stretching further than ever before to make sure the race had the support and direction it needed to ensure Parky’s play time was limited and to take as much of the load off my shoulders as they could.  Of course, no one ever said a word about it and maybe it was just part of one of those dreams that race directors with Parkinson’s sometimes have. But I do recall vividly Bill Lott simply refusing to leave my side while I looked all over the parking lot around Premier Health and Fitness for my car one evening after packet pick-up.  And why was Tom Perkins so insistent on starting to mark the course on Wednesday afternoon.

No doubt, one reason it remained an unspoken “plot” was a fear that I would respond by blowing up at the suggestion that I could not do something. That was no doubt most prevalent when it came to Mary Jean.  Thank goodness for her patience.  I think the race timing committee, volunteer coordination committee, registration committee and the course set up committee put together the best run Tallahassee Turkey Trot since I have been involved.

The conditions for the race were near perfect as 5,052 finishers from four races crossed the finish line.  The final count was the seventh time more than 5,000 runners have finished the race.  There were also two years when the number of finishers exceeded 4,900 and one year (2016) when 6,183 participants finished.

It seems fair to refer to 2019 as a year of community and family.  Approximately 3,351 people were registered under the category of “Family of Three or More.”   Admittedly, the definition of family is broad, as it should because it is important for this event to be affordable. The largest group of participants was the under 18 (21.5%), followed by the 18-29 age group which checked in at 19.27%.  Females were 54% of the participates while males were 46%. 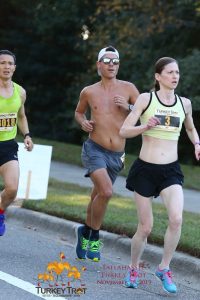 There were 1,116 participants who signed up to support one or more of the middle and elementary school programs and help them win financial support to improve the running programs at the schools through the GWTC-Turkey Trot Striders Program. There we a lot of Turkey Trot Striders sticking markers on their bibs.

And as promised there were runners ready to fly. While neither of them had much competition, Chris Haynes (10K) and Ricardo Estremera (5K) had all out races against the clock.  Estremera completed his 4th Tallahassee 5K in less than 15:00 minutes. The Turkey Trot 5K record belonged to Matt Mizereck who ran 14:46 in 2010 to set the record.  Last year Estremera ran the Turkey Trot 5K in 14:47 – one second off the record.  This year I watched him move powerfully down Esplanade Way toward the finish line. At first it seemed he did not have a chance to break the 5K Turkey Trot record but he began pushing harder trying to increase his leg turnover while willing the clock to slow down. As he ran for the finish line he began to float just above the ground. Unbelievably, his chip crossed the line in 14:46 – exactly the same time as Mizereck’s 5K record.  It was his 5th Thanksgiving win in six years.  Angela Cipriani took the 5K with a time of 18:44.

Meanwhile Chris Haynes had been debating whether to run the 10K, which was more compatible for his training program, or to step up to the 15K where the prize money was more.  The assistant coach at Leon High School was most happy to earn some “shoe money” for training to qualify for the Olympic marathon trials.

Perhaps the most impressive achievement from Thursday Sheryl Rosen’s 15K win in a time of 57:33, marking the ninth time she has won the Turkey Trot 15K. One more win and she will be a lifetime member! Austin Whitelaw also captured a 15K win. His time of 49:24 was strong.

I think it was a record for the number of laughs and smiles I saw. The families really were fantastic.  Distant relatives had a chance to say hello.  It seemed the largest group of runners at the event were the under 18 years of age.  No polling was done to determine the runners’ preferred political party or candidate.  Yes, we can set aside what divides when we really want to.  I guess one might even think about living in a better world.

A look at who ran the 2019 Tallahassee Turkey Trot