The 2022 Male Triathlete of the Year hasn’t been a triathlete for very long- just short years, but his work ethic, commitment to the club, and what he has accomplished during his time spent as a rookie in the sport is why he will be standing on this stage by the end of this speech.

Like many of you, he ran tack in middle school and tried cross-country in high school, but insists he wasn’t very good at it. It wasn’t until college that he really started to hit his stride and began training for his first marathon. Sadly, just a few weeks before the race, he had to pull the plug after discovering a knee condition that would require surgery.

Fast forward a few years, he took up cycling and at the Six Gap Century ride in Georgia he met a crazy group of triathletes from Tallahassee. They convinced him that triathlon would be a blast! He only needed to learn how to swim. 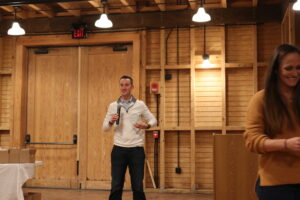 Male Triathlete of the Year

The next year, in 2021, he completed his first 70.3 in Chattanooga, TN. with a sub-6 hour finish, as well as almost all the Gulf Winds Triathletes Grand Prix races in Tallahassee and Georgia, despite living in Tampa at the time. This often involved leaving late Friday after work, driving four hours to Tallahassee, racing Saturday, and driving back home Sunday for clinic on Monday. He has done that for the past two years.

In addition to claiming several podium spots in a tough 34-39 age group, he met a lot of friends in town and became part of the local triathlon community. Later that year, he competed at Florida 70.3 and improved upon his best time by 8 minutes. He was also the second place overall male in tri club year-end standings during his first year as a rookie triathlete.

This year, he competed at Maine 70.3 and most recently North Carolina 70.3, where he achieved a 25-minute PR and his first sub-5-hour finish. In addition to being part of Gulf Winds Triathletes, he’s currently on the Spaero Elite Triathlon Team and Eliel Factory Cycling Team.

He moved to Tallahassee two months ago after getting married to a fellow triathlete and relocating his medical practice. As a family medicine physician, who specializes in sports medicine, he’s sure to be a welcomed resource for Tallahassee runners and triathletes and he’s very excited to start running in more GWTC races.

His heart for serving is unparalleled, having volunteered as team doctor for various sports teams, served in the medical tent at IRONMAN races, helped coordinate spectator tents for our club, spent hours taking photos of our teammates at races, and now serving on the board of directors for 2023. He is wholly committed to the sport, our club, and is a source of inspiration for me every day.

He really is the epitome of his motto, “exercise is medicine,” and, on top of that, he’s just the most hard-working, kind-hearted, and genuine person I know, my husband, and the 2022 Male Triathlete of the Year- Matt Vermeer.