An Event that Benefits All

It remains one of my favorite days of the year.  The day of the Great Pot Luck Bash 4 Mile Run and Celebration usually starts early and finishes late.  But it is a night I can almost always count on going to bed with a smile on my face.  This year’s events are a week later than usual; the fun will be June 11 with the run starting at 6:00 p.m. The festivities follow right after runners cross the finish line.   The run showcases Gulf Winds Track Club’s Chenoweth Fund. The purpose of the Fund is to promote running and fitness in the Big Bend area by assisting local running organizations, individuals and members of GWTC in their efforts to achieve athletic or academic excellence. 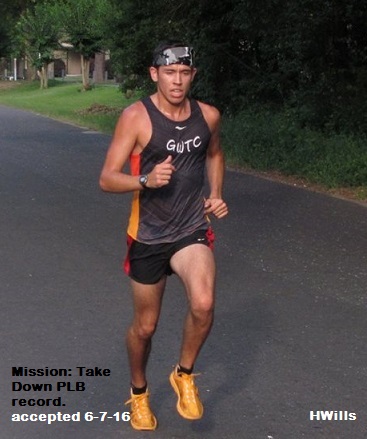 There are number of things that make this event unique.  First, the main honorees on this night aren’t the runners competing in this event, but rather the outstanding high school runners and field event competitors who year after year make Tallahassee such a hot bed for track and field and cross country competition.   The post run celebration starts by recognizing these athletes, their coaches and their schools.  That recognition includes plaques and financial assistance.  It is a good way to build a connection between GWTC and the local high school programs.

Then there is the uniqueness of the race itself.  Runners are not allowed to wear watches or any other timing device.  The miles are not marked on the course, which is primarily along the trails of the Eleanor-Klapp Phipps Park, so runners are never sure how far they have come or how far they have to go.  There is competition among runners for place, the race is a grand prix event for example, but awards are given out based on how close a runners comes to his or her predicted finish time.  There is something about ditching that watch that lets a little bit of the pressure off. And this year? Well, you have to check out the “Can Stanley do it?” competition.  Win this one and you could be on your way across the country.

And of course, the location for the event is another one of those Tallahassee treasures.  Within a “stone’s throw” of each other are the Forest Meadows Tennis and Pool Complex, The Meadows Soccer Complex on Millers Landing Road and the Meridian Park Multi Use Youth Sports Complex (including a lot baseball games). Registration on race day is at the Forest Meadows Parks and Athletic Complex (4750 North Meridian Road). The running course wanders for approximately 4 miles through Elinor Klapp-Phipps Park, which includes more than 670 acres of land, including miles and miles of trails for running, hiking and biking, streams, giant magnolia, poplar and oak trees and more. The Northwest Florida Water Management District works with the city to keep this watershed for Lake Jackson a place that protects the lake, rather than becoming a passage way for polluting it.

Over the last few years a new twist has been added to the race as the course has been changed without letting the runners know ahead of time.  I can assure you from experience it is easy to get lost on this beautiful piece of land.  The race course is always well marked, but when you don’t know how far you have come, or how long you have run, it is especially exasperating not knowing where you are going.

Since inception in 1999, more than 60 students have been acknowledged as athletes of the year resulting in scholarship awards or program supports of over $30,000 through the Pot Luck Bash. There are some great stories of this support being critical to athletes’ efforts to move on to the college level.  One student used the money to buy gas for her mother to drive her to college.  She had received a surprise last minute offer to run for a team, but she had to report the next day and could not have made it without the help to buy gas.  Years later she came back to show off her college degree.  Another used the money to pay for sitting to take his GEC exam and graduate high school. It was the only way to preserve his eligibility for the next level. If you look at the list, you get a vivid picture of how good the track and field and cross country programs in this area have been.

While Pot Luck focuses on the elite high school athletes, the Chenoweth Fund also provides support to programs throughout the Big Bend Area to provide uniforms, hurdles, travel costs and much more. Despite the huge number of kids who participate in cross country and track and field, most schools have very limited budgets.

Without a doubt the best part of the Pot Luck Bash is the food, music and fun after the running is over.  Over the last few years the fun has taken place outside Forest Meadows under the friendly tents provided at no cost by Jeff Smith at AJAX construction.  It is always a great treat to watch the high school awards, eat great food and enjoy a bit of live music.  You register at http://tinyurl.com/h29zor2.