It would be difficult to forget. The door opens and the doctor walks in. The room around you is cold and impersonal. You have family to support you but all you want to hear is that it is ok if you go back to the field for football practice. At 16 years of age, that is what life in Cleveland, Ohio should be about. Not life and death decisions in doctors’ offices.

There was a dreadful silence before the doctor drew a breath to speak. “Why did he have to take all of the air out of the room with one breath?” It puts too much fear in your mind. So much fear that all you can do is watch his mouth move. There is no oxygen in the room to transport the sound. Somehow the message gets through – you have been diagnosed with Stage 4 Hodgkin’s Lymphoma. It was 30 years ago.

It is not a certain death sentence, but to survive Bob Garbark must win many battles. And each battle has a price and will leave casualties behind. According to the American Cancer Society (“ACS”), Hodgkin’s lymphoma can start almost anywhere there is lymph tissue. Most often, however, it starts in the lymph nodes in the upper part of the body. The most common sites are in the chest, neck, or under the arms. To be labeled Stage IV, according to the ACS, Hodgkin’s lymphoma normally has spread widely including into at least one organ outside of the lymph system, such as the liver, bone marrow, or lungs.

There would be no football for the 16-year-old, instead he began to absorb the news and develop a fight plan. Three things show themselves quickly with Bob. He will be thorough and determined in battling obstacles. He will lean heavily on family and friends. And finally, he will not sit around feeling sorry for himself. He will also continue a lifelong commitment to exercise, a commitment that he believes has kept him alive.

Radiation treatments came first. After six months, it seemed the treatments were working and the cancer was on the run. However, Bob felt certain there was still something wrong. A lump under his arm pit convinced him he was right. And when his doctors reluctantly ran a biopsy, confirmed the suspicion. Instead of celebrating, chemo therapy was added to the treatment mix. By the time the treatments were “done,” Bob had lost all of hi 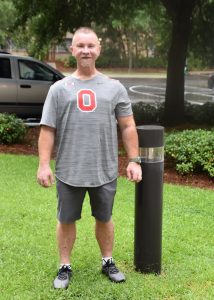 s hair and more than 30 pounds of weight.

Bob moved to Tallahassee in 1988. He graduated from the Pat Thomas Law Enforcement Academy and worked for the Leon County Sherriff’s Office for 10 years and then Homeland Security for almost 10. By no means did that signal the hard days were done.
In 2010, Bob lost his balance fell into a ditch, landing on his shoulder. Weakened by all the treatments, the shoulder had separated and needed to be repaired through surgery. As his doctor began preparing Bob for surgery, he discovered his patient’s aortic and mitral heart valves were not operating correctly (another residual casualty from cancer treatments) and needed to be replaced. So, instead of getting his shoulder fixed, he received new heart valves in 2010. Could have saved the valves.

Once again, his workouts told Bob there was still a problem. Extreme fatigue, shortness of breath and difficulty recovering from workouts signaled obnoxiously there was a problem. Bring back the doctors and take another look. This time they found extensive heart damage, likely the result of the cancer treatments. He was told he was on the verge of complete heart failure and should not leave the hospital. The only solution was to fight for a heart transplant. And in fact, Bob spent almost all of the next 14 months in Shands Hospital transplant center waiting for the right opportunity.

In the early morning on March 14, 2014, a 20-year-old man died in a car accident. When the call came to let him know a heart was available, Bob almost missed his opportunity. At the time he was talking to his wife on another line. Thinking the call was food service, he let it ring through. When the call started ringing again, an alert nurse said “I think you should answer that. His heart was transferred to Bob that night. The process became even more complicated than normal when his sternum became infected. The doctors almost lost Bob, but with some powerful antibiotics and a hyperbaric chamber he pulled through again. In May of 2014, Bob headed home to Tallahassee with a central IV and wound vac in place. There would be 5 more weeks of treatment.

Through all of the tough times, Bob continued to maintain the best exercise programs he could, certain they were helping him mentally and physically to get through the incredibly tough times. He kept his attitude positive. That doesn’t mean he did not struggle. He quickly noted how important the counseling, including the counseling for depression had been.

Family and friends were a critical support team as well. One of the most important people he looked to for help was his mother. “I called her about everything,” he told me. He lost her at the age of 81 this past Valentine’s Day. Bob has been marred 24 years and has two kids, ages 16 and 21. He has six brothers and sisters. He also gives great tribute to his “family” at work. The fortunate part for him is he works at Premier Health & Fitness and he also works out there. The ability to work out and the work flexibility has been great. The caring coworkers have been “fantastic,” he reports.

Bob takes 15-20 pills a day and he knows the next challenge is right around the corner. It is hard not to worry. But you can be certain he won’t be wasting away asking “why me.” Instead, he will be demanding the course to follow to continue living life to its fullest.