As the wheels touched down on the runway Thursday about 5:15 p.m., a near perfect Tallahassee spring evening welcomed us home. There was still plenty of light outside so I decided to follow through on my plan to run the Munson Trail. I had forgotten what a treat this south side running haven presents. The tall longleaf pines stand tall over a very different ecosystem than the hardwood forest in the northeast quadrant which I habitually run.

There is a big board at the trail head plastered full of great information about the area in the Apalachicola National Forest. Most prominent are the declarations that the USDA Forest Service is restoring this area to its native longleaf pine ecosystem. There is a stark contrast to the trails of Munson Hills and the dense hardwood forests of Forest Meadows and Lake Overstreet. There are wide open spaces under the tall trees and the early invaders of this territory reportedly could roll their wagons for miles under the trees without having to stop. At that time there were over 90 million acres of longleaf pine forest. Today there are less that 3 million acres as development, timber practices and fire prevention programs have decimated the trees and the ecosystem over which they stand guard. Preserving the remaining longleaf pine forests is not an easy task. One key to maintaining such system is frequent fires that keep the mid-height growth out. The wire grass that dominates the floor of the longleaf forest is a natural kindling.

As I wound my way around miles of corners and turns much of the ground was charred black from recent flames. My first thought was “Where are my oaks?”, but it didn’t take long to be become lost in this system’s unique beauty. Even the dark charred ground taught me a good lesson in appreciating diversity. Here it opens the door for so much wildlife – both plant and animal – that might not survive around Lake Overstreet, like the endangered red-cockaded woodpecker and the gopher tortoise. You can find more about the Munson Hills trail by reading Gordon Cherr’s description in the local running trails section of the web page or by checking out:
http://www.dep.state.fl.us/gwt/guide/regions/panhandleeast/trails/munson.htm.

High Schools put it on the line

Isn’t technology supposed to make life easier for newspapers? So why is it the best the Tallahassee Democrat could do for the 3A regional meet is a pre-meet story on the Lincoln 4 x 100 relay team. Don’t get me wrong, the relay team deserves the coverage. They ran the fastest high school time in the nation at that distance at the GWTC sponsored, Seminole Invitational. (Yes, faster than the high school winners of this weekend’s Penn Relays). Perry Shaw and his crew ran a flawless meet at the FSU track. On the boys side Wolfson High dominated the meet scoring 112 points to beat Gainesville who had 75. Host Lincoln was the top local team with 53.25 points, Chiles had 48.

The paper did provide better coverage of the 1A state championship where Maclay finished 5th in both the boys and girls competition, ending a long streak of state championships. Maclay’s record since the turn of the century is truly amazing. The girls won state titles in 2000 and 2002, finished 5th in 2001, 2nd in 2003 and 4th in 2004. 2005 marks the first time since 1996 that neither the boys nor girls finished either first or second. Congrats are in order nevertheless for North Florida Christian’s Michele Jenije, who won the triple jump with a leap of 38′ 09″ and Lori Bowen of Maclay, who vaulted 11′ 07″ to capture the pole vault title. Stirling VanWinkle won the boys pole vault for Maclay with a vault of 14′ 06″. It is also worth noting the 7th grader Alicia Finley took fourth place in the 1600 meter race with a time of 5:22.72.

Tallahassee and Leon County have had some talented distance runners over the years, but Joe Franklin and Alicia Finley have a chance to rewrite all the record books at least for Leon County before the graduate if they have fun at the sport, stay injury free and stay with it. Here’s hoping they do because it will be a lot of fun to watch.

So while I am the topic of high school track and field, June 4 is the Pot Luck Bash and the Chenoweth Committee will be awarding scholarships in the name of the outstanding track and field and cross country athlete. The members of the committee especially encourage local coaches to nominate athletes, but even if you are not a coach and have some ideas, please feel free to share them with the committee. The members and past winners are listed in the Chenoweth section of the web page.

They are back – The Deer Fly solution 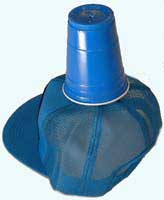 With spring turning to summer our annual pests, the deer fly, are starting to buzz again. Maybe this year will be the year we can match wits with the pesky creatures who know how to remove a pretty good chunk of flesh from a running human. Thanks to Dean Paini for pointing out the following web page that contains the secret to controlling deer flies: http://ufinsect.ifas.ufl.edu/deerfly_trap.htm. Of course our own Dr. Karl Hempel has long been a proponent of trapping the deer fly by attracting them with funky hats, but Dr. Mizell, a professor of entomology, seems to have taken the research to another level. Here is Dr. Mizell’s carefully researched idea of the perfect deer fly trap for the runner:

So, here’s hoping to see you on the trails. You wear the hat and I will follow.