Is this Award for Fishing or Coaching?

Is this Award for Fishing or Coaching?

There is a very special place, even by Tallahassee standards, where rivers, marshes (salt and freshwater), a bay and a gulf create great beauty, and a place for cross country and track and field coaches to develop. It is easy to lose one’s self there. Not lost in the sense of being unable to find one’s way out but lost in the sense of being unconnected to the problems and concerns of everyday life. A unique dike system and as many as seven rivers find their way into the Apalachee Bay before meeting the Gulf of Mexico. Of course, if you recall the story of the alligator that turned the powerful and frantic turtle into its dinner, you know it is not always idyllic.

For most, fishing in the St. Marks Wildlife Refuge means either casting from a safe bank or getting out into the flats with a boat. For Gary Droze, it means putting a canoe on your back and hiking and paddling your way over the dikes, through fresh and salt water marshes and across longleaf pine forests and savannahs. “The ebb and flow of the tides in Apalachee Bay’s salt marsh creeks feel nearl 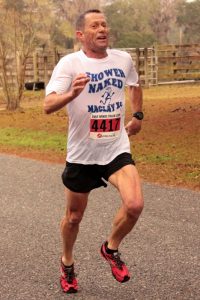 y as much a part of me as my own circulatory system,” Gary wrote. There must be some coaching magic in those waters.

Paradise is of course not without it perils. The fishing line was stuck hanging straight down from the tree limb jutting out over the water. Droze scampered out on the limb confident the line could be freed if he pulled from directly above the spot where it disappeared. Seconds later he slipped and splashed into the water. Now understand, if it were not for this amazing place, Gary well might have left Tallahassee long ago. However, as he plunged into the water, it appeared his coaching career was coming to an end. On the other end of his fishing line was a large, very unhappy alligator. But Mr. Droze has a few skills that the poor turtle did not. He rose straight up out of that water and started walking, no running on top of it, just like he was … well, you know Gary would never claim such holiness. Just as he would never tell you he had been inducted in the Florida High School Athletic Association Hall of Fame (FHSAA Hall of Fame).

There are only 193 individuals enshrined in the FHSAA Hall of Fame. It is a very exclusive club. Inductees include “coaches, administrators, contest officials and other contributors … who have raised the level of awareness of high school athletics through their dedication, efforts and achievements.” (https://www.fhsaa.org/departments/special-programs/hall-of-fame) The FHSAA web page also says “Longevity, without meaningful statewide impact, does not constitute appropriate credentials for Hall of Fame consideration.”

The stats are mind numbing, but they are the less important part of what really makes Mr. Droze a Hall of Fame coach. Just talk to a few parents. I reached out to 3. (For their full comments please visit (Droze is Special) Jane Johnson wrote: “The influence he has had on our entire family transcends running and competition. In his humble but powerful way, Gary Droze taught us all how to push ourselves to be better people.” She also said: “He was an exceptional coach to both of our daughters and showed them how to find speed, endurance and discipline within themselves they could not have found on their own.”

Vicki Emo watched her daughter grow under Gary’s direction. “Gary Droze was such an important part of Jennifer’s middle and high school years. He encouraged Jennifer. He developed her talent as a runner, and he made her feel like she was important and special. He provided for Jennifer, as well as countless other young people, a positive activity and atmosphere where the students felt respected, safe, and encouraged. I also remember Gary asked his wife Vicky to marry him by having his runners hold up signs during a track meet.”
Craig Willis also watched his kids grow under Gary’s guidance. “As a parent of not just one daughter, but two who ran for Gary, I can say without equivocation that this is a well-deserved honor. He brought out not just the best runner in each of them, but more importantly the best as well-rounded young adults. He placed Caroline in leadership roles with younger runners before she knew how to be a leader, and by doing so taught her life skills that will benefit her for the rest of her life.”

I could find hundreds more, but these three make the point. Teachers and coaches matter. Ten more people died last week in another school shooting. A 17-year-old apparently totally lost. Of course, no coach or teacher can do it all, but I know many like Gary Droze make a huge difference. I feel confident the more we support coaches like Gary Droze, the fewer times we will have to shake our fist at the sky.

Hall of Fame induction is only one small way to say thanks.