The Perils of the Pine Run

She sat down in the middle of the street, oblivious to traffic, and started hitting her head with a mallet. It hurt, so she pounded herself harder and harder. Finally, she rose to her feet and began a wobbly walk to the sidewalk. Two pedestrians rushed to meet her. “What are you doing?” they asked. Her response was quick and clear – “I am training for the Pine Run.”

Running the Pine Run may not be quite that bad, but then again, if a runner is not prepared and tries to tackle the beast at too fast a pace, it just might be. There are hills early and hills late, there is challenging footing everywhere. There is changing terrain. It seems I am on a streak of running this race without being fit enough to do it. This year I am slowly gaining more fitness, but as anyone who has raced the Pine Run knows, “gaining” isn’t enough to avoid the mallet. Climbing those hills, especially late in the race made that mallet seem soft.

And then there is poor race director Gary Griffin (he is actually half of the directing team; his wife Peg Griffin is the other half). Gary is having a fantastic year of racing in 2017. We ran together for part of the race, but as we neared the last mile, he got serious and pulled away. Soon thereafter he rounded a bend and was out of sight. I was struggling, but rounded that same bend to find him lying on the ground, not moving at all. As I got closer, he was picking himself up, trying to clear the fog from his head as if he had lost consciousness. There was a big bruise on his forehead and a stream of blood flowing down around his eye, the drying oh his cheek. He assured me he was fine and took a few steps in the wrong direction before I yelled “wrong way.” Expecting Gary to need to walk a good bit to recover, and not wanting to start hurting as bad as I was, I graciously decided to make sure he was ok before I left him, walking with him for however long that might take. Best I can recall that was about 4 steps. After that, he was gone racing off to the finish. Maybe I can borrow his mallet sometime.

There are many reasons we all run, and despite (or maybe because of) its challenges, the Pine Run is one of my favorites. The Pine Run 20K is a 12.4-mile race run on the grounds of the Tall Timbers Research Station and Land Conservancy. Attendance at the Pine Run was down this year, just barely clearing 100 finishers. Maybe that means there is a shortage of people willing to sit in the middle of the road and pound their forehead with a mallet. Of course, there was a lot going on that weekend, including several other races (all shorter and easier) and a home football game against Miami that started at noon. The Pine Run is not for everyone, but I can assure you it is pretty special. Tall Timbers Research Station and the surrounding land which hosts this race offer so much. Neil Fleckenstein and the rest of the staff at Tall Timbers are great hosts. This year was especially challenging because of the numerous storms that blew through Tallahassee. A few weeks before the call, Neal was agonizing with the thought the conditions on the course might not permit the race. But a lot of work got the course into “passable shape.” The rough trail was possibly the toughest part of the race this year. It didn’t matter whether we were running up, down or flat, the terrain was challenging.

While the Land Conservancy manages and protects more than 114,000 acres, preserving the rural, scenic, and natural heritage of the great Red Hills region, the Research Station is known for its research related to the ecology and management of fire-dependent ecosystems, and wildlife, including bobwhite quail, in the Southeastern Coastal Plain. With the wildfires rampaging the western part of the country right now, the Fire and Wildlife Management Program is more important than ever. I remain in awe at all the studies and projects going with birds, including quail of course, of all sorts. The efforts to return many acres of forest to its natural longleaf pine ecosystem are also a treat to watch.

There are people who can slow their running efforts down enough to cover the 20K course while enjoying the new flower blooms and rugged land that surrounds them. There is so much to see too. 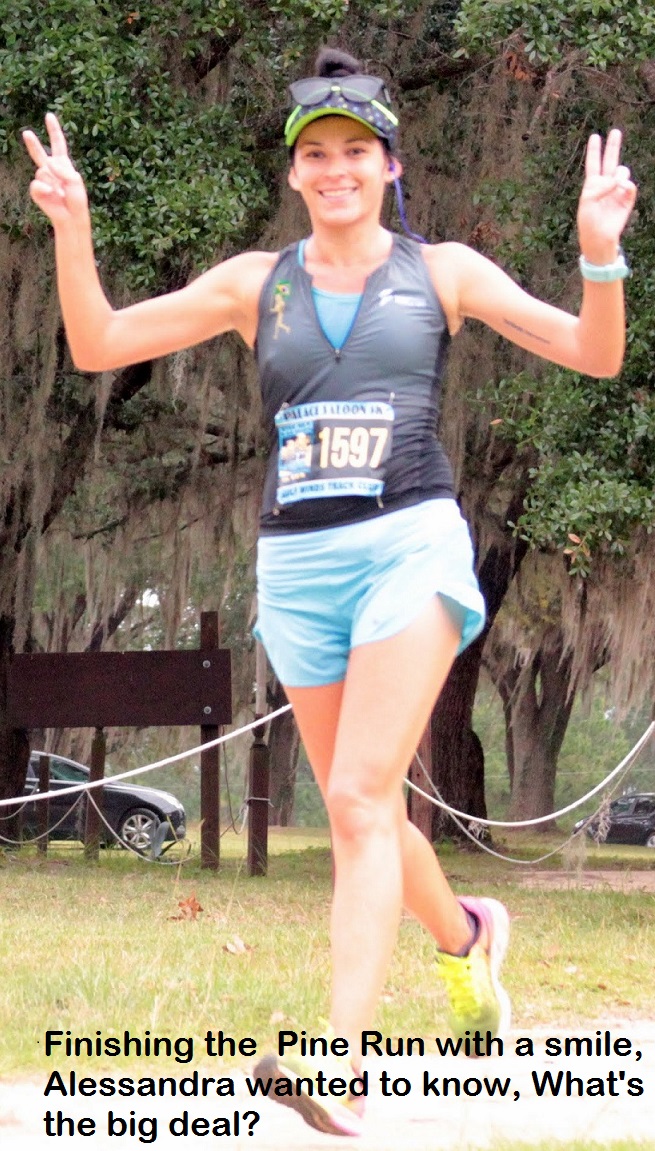 There are some other reasons it’s extremely rare to find more than 200 runners cross the finish line in this race. First, it can be a little bit challenging to find it in the dark. A 7:30 race start means leaving home around 6:00-6:15 and driving along Thomasville Road for 10 miles or so, wondering for at least 3 or 4 of those miles if you have missed the turn onto highway 12.

Moving the start time back has its problems, however. The race is 20 kilometers or 12.4 miles long. While I can remember some beautiful, crisp fall mornings for Pine Run, most of them were long ago when the race was held on International Paper’s property outside of Bainbridge. It seems that for at least the last 4 or 5 years, September’s weather has stayed around though most, if not all of October which means even starting at 7:30, it is going to be muggy and hot on the shores of Lake Iamonia. And the later the race starts, the more likely there will be conflicts with a football game.

No matter to me or another 100 or so die-hards, there is simply no place we would rather be the second Saturday in October. After a short thank you to Neal Fleckenstein and the rest of the Tall Timbers crew, the runners start down the road that is also the entrance to Tall Timbers, all still smiling, very much able to appreciate the surroundings as they begin their journeys. In the end, for most, the tough uphills, the warm weather and the challenging footing can be overcome, even if there will be a few visions of the finish line along the way – the place to finally set the mallet down.