Cleveland-Caldwell Advancement of the Sport
In 1984 GWTC recognized Michael Caldwell’s contribution to the sport with this award for his publication of Racing South Magazine and organization of the Racing South Grand Prix (both now owned by Running Journal). The award was known as the Michael Caldwell Advancement of the Sport Award until 2001 when Rex Cleveland, who served as the editor of the Fleet Foot since 1983, retired. To recognize Rex’s outstanding contribution to the sport and to GWTC, the award was renamed the Cleveland – Caldwell Award. The award is given in recognition of those who make significant contributions to the advancement of the sport, whether through research, education or some other area of expertise.
Past Recipients
Michael Caldwell, Rex Cleveland, Bruce Tuckman, John Hesselbart, Charles Yates, Dot Skofronick, Marilynn Wills, Lamons Warren, Gary Droze, Herb Wills, Don Weber, Gretchen Everhart School, Fred Deckert, Gary Droze, Tim Simpkins
1998 – Perry Shaw 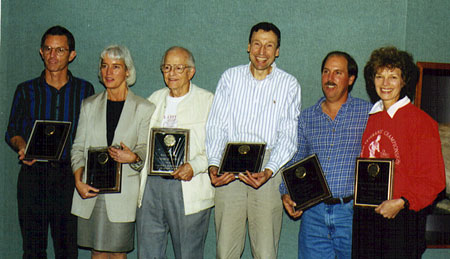