The 2019 racing season got off to a good start on Saturday (January 4) as runners raced over 4 distances on the slick forest trails of Elinor Klapps-Phipps Park.  A record month of rain in December set the stage and created perhaps the wettest and slipperiest conditions in the Swamp Forest Trail Races’ six-year history. Race day brought clear skies and nearly perfect temperatures for the runners as the temperature gage read 46 degrees at the start and it never seemed to warm up much after that.  While runners may have thought the weather was near perfect, the volunteers had a bit different view as the breezy conditions in the open start-finish area made it hard to find a volunteer who could stop shivering long enough to agree with the perfect weather description.

To understand this race, you must understand the terrain the course runs through and “the loop” concept that is used for creating the race courses. First, it cannot be said too often, Phipps Park is a true treasure for all of us who live in Tallahassee.

It is a multi-use area managed by the City of Tallahassee and the Northwest Florida Water Management District. The park’s designation as a watershed area for Lake Jackson not only helps ensure protection for Lake Jackson, it also protects critical wildlife habitat. But the park also provides fields of play for youth soccer and baseball, hosting many cross country races, and provides a venue for the Tallahassee Horse Trials competition.  As if all that is not enough, its single-track trail system takes hikers, runners and cyclist into places that seem far away from anything developed – where a 2 x 6 board becomes a bridge over a fast-flowing stream. That is where you will find the Swamp Forest Trail.

The following language shows up repeatedly when searching for Phipps Park on the web. This version is from Floridahikes.com: 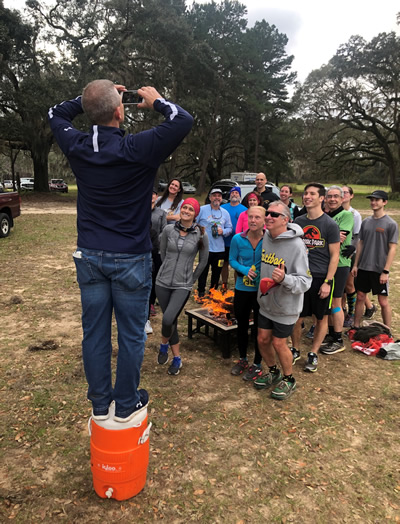 Ancient magnolias, massive tulip poplars, and sinuous alluvial streams are all part of the delights of Phipps Park, the city of Tallahassee’s most expansive and wild urban park. With 670 acres along the shores of Lake Jackson, Phipps Park provides recreation for all, with separate hiking, mountain biking, and equestrian trail systems. Part of the Florida Trail System, the Phipps Park Trail is made up of three stacked loops, each increasing in difficulty and length, showcasing trees of spectacular size and a carpet of trillium blooms each February.

The loop that runners complete for these races consists of mostly narrow single-track trail.  There is often not room on the trail for runners to pass other runners. Most runners however are good at following the courtesy rules.  These suggest, if not require, a runner to slow down and make room for a runner to pass if the runner is moving faster and if the runner says “on your left” or some other clear indication of wanting to pass.  Everything on the trail is either up or down or twisting around a narrow corner and sometimes – it is all of the above. The terrain, even on a good day creates barriers to fast running. There simply isn’t enough room on most parts of the trail for a normal stride, so it gives way to a shorter, choppier stride.   Leg muscles wear down under the up and down stress created by the trail. Even runners who learn to run the trails confidently find it impossible to avoid this slow-down.

When you add ankle deep water, roots and mud the challenge obviously gets steeper.  There is another factor that can be costly. In addition to the Swamp Forest Trail there are trails named Creek Forest Trail, Big Tree Cut off, Coon Bottom Loop, and Oak Hammock Loop.  The race course turns and twists through these trails and many of the turns are marked only with small orange flags. These small orange flags are arranged in coded fashion to let you know what to do.   But they are easy to miss if you do not pay close attention. I ran off the course once (someone yelled at me almost right away though) and I had to stop and scratch my head while pondering which way to go another time.  Bobby York and team did a great job overall though placing maybe 250 of the flags out and then going back out to pick them up later. This difficulty is one of the main reasons for using a loop course.

There are no words sufficient to properly thank the volunteers who endure this event to make it such a good one.  Bobby York as race director starts it all and sets the bar. Peg Griffin, Bill Lott, Tom Perkins, Judy Alexander, and David Anderson were all nearly frozen when I first arrived and very tired when I left, but nowhere near done.  I don’t know which better represents our great city, the park or the people; I just know we are most fortunate to have both!

Find complete results of the four races at https://gulfwinds.org/raceresults/2019/SwampForest2019.asp