The past couple of years I have developed a deeper appreciation for those of you who always say “yes” when asked to serve the Club. 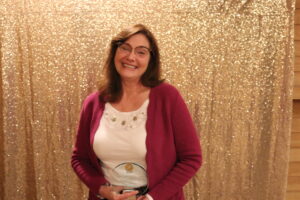 Tonight’s honoree always says yes. Even when not asked, tonight’s honoree just shows up and jumps in to do whatever needs to be done. Tonight’s honoree quietly steps in and persuades others to help, too. I have witnessed this person recruiting and signing up new Club members while volunteering at our events. The Club presents an award for those who make significant contributions to the advancement of sport. It is called the Cleveland-Caldwell Advancement of the Sport Award. Tonight’s honoree won that award. (2010).

Tonight’s honoree served 9 years on the Grand Prix/Awards Committee (including serving as Chairperson). I served six years alongside her and observed her good leadership skills. (There are your first gender clues).

She has served multiple terms on the Gulf Winds Track Club Board of Directors, including this year. (Your second clue).

Lastly, she has managed the Grand Prix program within the 8-week Summer Track series of races each summer for longer than anyone can remember. This commitment and her labor of love results in a lot of happy summer track runners each year.

Now, it is an honor, and my great pleasure, to present the 2022 Gulf Winds Track Club Hall of Fame Award to:  LISA UNGER