The cold weather moved in last weekend and no doubt some folks decided it was better to stay under the covers Saturday morning then it was to get up and run a race. For those who did get up and run, it was an especially beautiful day made for fast running. There were 129 runners who completed the 2022 Tannenbaum 6K Cross Country Run (“Tannenbaum 6K”) at the Apalache Regional Park. The cold was a nice transition to the real cold on Christmas eve.

The Tannenbaum 6K has been dormant for two years. It was cancelled because of COVID in 2020 and did not get back on its feet in 2021. But Saturday, December 17th, everything was all go, thanks to Herb Wills  and Judy Alexander the co-directors of the race. Those who did not make the trip down Highway 27 to the Apalachee Regional Park missed out on a delightful experience. The race was first run in 2011 and covers the quirky distance of six kilometers (3.73 miles).

The temperature dipped to as low as 37° according to my car gauge as I drove down Highway 27 to the race. But it quickly turned into one of those clear cold days that make you feel alive, not cold.  The radiant sunshine helped warm participants up quickly while the cold temperature kept them from overheating.

The temperature had risen to 45 degrees by the time I clicked my watch to start my race at 9:00 a.m. More than 129 runners spread out over the huge grass field at the start of the race some of them perhaps dreaming of participating in the 2026 World Championships. ( Dreaming I said not believing.)

The racing at the top of the pack sorted itself out quickly on Saturday. Leonard Canete was racing at the Apalache Regional Park (“ARP”) for his first time. He took the lead early and never looked back finishing in 21: 45. 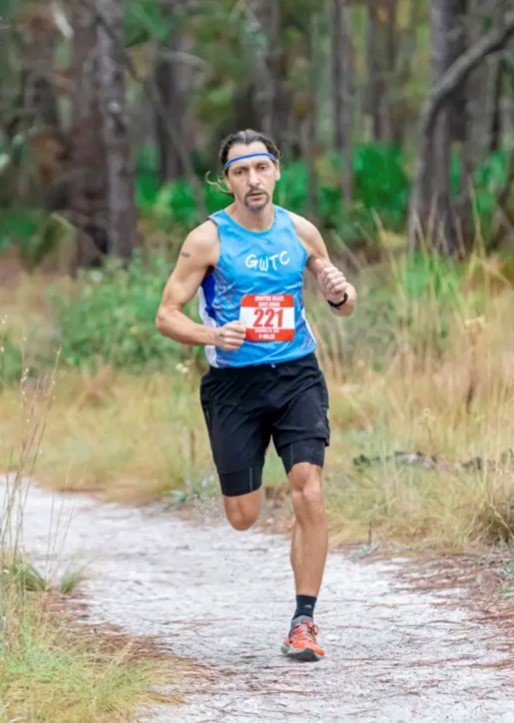 If he had looked back, he would have seen Katie Sharon was the next runner. Katie would grab her 4th title in this race and despite crossing over into masters competition it was her fastest time. She won this year’s race in a time of 22: 16. In 2011 she finished in 22:33, in 2015 it was 23:30, and in 2017 she finished in 22:46. A remarkable record of speed and consistency. Second place in the women’s category went to Megan Churchill who finished in 24:00.  Michael Niezgoda finished in a time of 22:36, 10 seconds behind Katie, to finish third overall and second in the men’s category

Katie and Leonardo were also the top masters runners.   Hong-Guo Yu and Stephanie Liles-Weyant were next with times of 23:11 and 28:39. The youth movement saw some great performances, led by two nine year old’s; Acadia Hassell and Landon Heitmeyer covered the course in 28:25 (7:38 pace) and 26:51 (7:13 pace).

Overall and age-group winners were awarded a poinsettia plant.  All runners received a pair of running gloves. Here is hoping for another pair next year.