A conversation with Jane Johnson

A Conversation with Jane Johnson

Gulf Winds Track Club has been most fortunate to enjoy a series of outstanding leaders who have served as president during the club’s history. Among the very best of those was Jane Johnson the club’s Past President. I was thrilled when she agreed to answer a few a questions for us.

Q. You have passed the mantle of President to Tom Perkins. Assume for a moment this is the only chance you will get to talk or correspond with him. What three things about GWTC would you tell him to protect and make sure he passes on to the next President?

1. The club’s commitment to making a positive contribution to the local community (financially and through volunteer service) through our shared interest in running.
2. The club’s commitment to serve all types of runners, and to provide equal opportunities for fun, competition, recognition and improvement for every age level and every level of athletic ability.
3. Our support of youth running programs.

Q. What three things would you put at the top of his list to try and change?

1. His hairstyle (just kidding.)
2. The maintenance of a building fund in the club’s budget.
3. The arrival of deerflies every spring.

Q. What impact did being President of the Club have on your life? 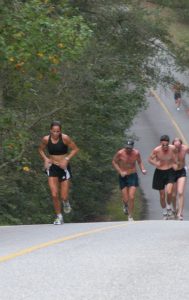 At the risk of sounding “over the top” sentimental, serving as president of the club has had a profoundly positive impact on my life, and on my view of the capacity for kindness and generosity in the people in our community. During my term as president, I was continuously bombarded by extraordinary acts of volunteerism, selflessness and old fashioned caring. Whether it was to make sure a race or local track meet was pulled off successfully, or the costs of a child’s kidney transplant were defrayed, or someone’s 70th birthday was appropriately celebrated, or to rally around another member’s cancer diagnosis, our members never ceased to impress me with new levels of goodness and commitment to one another as a family of like-hearted friends.

It may be that the majority of the time, we are operating under the influence of exercise-induced endorphin highs, so it’s easier for us to be in good moods and feel charitable towards one another. Whatever the cause, I have to say that I have never seen anything like it in any other group of which I have been a member (including the seven brothers and sisters I grew up with.)

Q. What was the biggest surprise to you about the job?

How much time and dedication other members have put into the club over the years to create the legacy that we have.

Q What do you think the biggest accomplishment of the club was during your terms?

I think that each of the successful club-sponsored races we put on during my terms were major accomplishments in themselves, if you think about the fact that their success is entirely dependent on volunteer time and commitment.

Leading the Pack…Jane leads the runners up the hill at the 2002 Pine Run.

Our club race directors are truly unsung heroes, working behind the scenes, begging for sponsorship money and volunteer labor, taking responsibility for everything from ordering porta-johns to processing accurate results to getting the best deal they can on prizes and t-shirts so there is money left over for the club or the particular charity the race supports.

Other less notable accomplishments were the rewrite of the club’s constitution, the development of Grand Prix race standards and the Freedom Garden at Forest Meadows.

Q. You have had a unique opportunity to run Boston as an invited runner the last two years. What is your favorite memory or experience from those runs?

Being in the little Korean church before the start and watching the “pros” go through their pre-race rituals and routines. I found myself getting really intimidated listening to the Americans talk about their coaches and their training while stretching and fidgeting and recounting the fast times they had run in previous races. I felt totally out of place and wondered why I was even there. Then I went downstairs, and walked past a group of Kenyan men, who were leaning on one another in a tight little group on the floor. Their peaceful, quiet attitudes were such a stark contrast to the American personalities upstairs, that I just walked past them feeling reassured that it didn’t matter if I got my butt kicked in the race, because the race I was about to run was between me and myself, and although I hadn’t trained as much as the others, and I didn’t have a coach, I was still there and finishing would be its own reward.

I think the mix of “aging” runners, who are no longer chasing PR’s, with younger runners creates a really positive synergy. The more experienced runners can provide valuable advice and counsel to younger runners, who are convinced that their bodies will always be invincible. Not that young runners believe anything that we veterans may tell them, but the advice is there all the same. I also think older runners who have managed to hold their bodies together and can still run races are a true inspiration to younger runners. I know that every time I see Charlie Yates come across a finish line, I say a silent prayer that when I am 78 years old, I will still be living my life as positively as he is.

Likewise, although I have given up hope of any new PR’s for myself, I get really charged up watching younger runners improve – especially my daughter Kara, as she becomes a stronger, faster and more mature runner each year.

I think the mix of different attitudes and age groups keeps all of us simultaneously mindful of our potential, our limitations and our mutual interdependence, which is a very good thing. I wish we could be surrounded by such an environment in all aspects of our lives.

Q. You have agreed to direct the Women’s Distance Festival 5K or whatever name it operates under this year. (A great match up, I think.) What do you have in mind for the race in 2004?

I’d like to change the focus of the race from being a fundraiser for the Tallahassee Women’s Center (breast cancer treatment) to being more of a tribute to the distance women have covered in their participation in sports over the years.

That is especially relevant to me this year, after being part of the first all-women’s start at this year’s Boston Marathon, and being one of the few women in that group old enough to remember the year that Title IX passed (my senior year in high school.) At the time, I had no idea what kind of impact that legislation would have on women’s sports. But standing on that starting line that day, and remembering how Katherine Switzer had been pulled off the Boston Marathon course before women were allowed to run the race, and being treated as an “invited runner” was an experience that will remain burned in my psyche for the rest of my life.

Q. Do you think it is still important to emphasize and create opportunities for women in sports, especially running? Do you think GWTC has done enough on this front?

I think it’s enough just to have separate scoring and timing for men and women. As far as our club’s programs are concerned, I can’t think of an opportunity that exists for men that women don’t also have. I can’t think of a single instance in my life – or in my daughters’ lives – where we were unable to pursue an athletic goal because of our gender.

Q. Life moves at a frantic pace these days. You have a very active life including a family, a demanding job, a commitment to your faith, a voracious appetite for books, and long list of hobbies. Does running help you manage all these demands or add another layer of stress? What advice would you give a young woman about to move out in to the “real” world about how to balance all of these things and set priorities?

Running definitely helps me balance everything else. I am an early morning runner, so that time I spend by myself each day gives me an opportunity to clear my head, pray, and focus on the things I don’t usually have time for during the day. I find that I do my best creative thinking and problem solving while I am running, and I doubt that would happen in a busy office environment or amid the distractions at home. Running also puts me in a good mood, so it’s a great way to start each day off in a positive frame of mind.

As far as advice for young woman moving into the “real” world, I think one of the most important “balancing” skills I have learned along the way is actually something I learned from athletics.

Balancing is all about goal setting. Just like deciding you want to do a triathlon or run a marathon, you start by envisioning your finish line, then back up from there and devise a strategy to take you from where you are now to where you want to be. Along the way, you can make choices about how to allocate your time based on whether those activities will help or impede your progress towards that goal. That tactic works in business, in raising a family, in getting along with your spouse (helps keep you from getting too caught up in small stuff) and in achieving your athletic goals.