A conversation with Judy Alexander and Brian Corbin

A conversation with Judy Alexander and Brian Corbin

GWTC members reach out to the community in innumerable ways, but none more important than the through the group that coaches in the elementary, middle, and high schools. Judy and Brian not only ride herd on club memberships and mailing the Newsletter, but they took over duties – or maybe we should say created them – of cross country coaches at North Florida Christian. We took a few moments to get them to tell us about the experience.

DAY: Tell me about the history of NFC running programs before you took over.

JA: NFC has had XC teams for a long time, but it has been 10 years since the school has been a force to reckon with at meets. About 4 or 5 years ago, Juan Gautier, a lawyer who had run well in college, coached the teams for a couple of years, during which it looked like they would become competitive again. After Juan left, the program began to decline through lack of interest, and students chose alternative sports in which to participate.

DAY: Why did you get interested in picking up the torch? 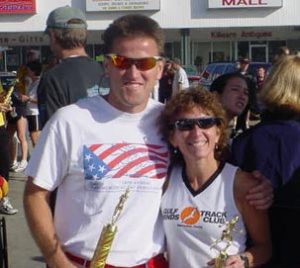 JA: Last year, NFC opened up extra-curricular activities to sixth graders (still regarded as elementary school there) and my daughter, Whitney, exhibited an interest in running XC. Because we had never pushed our children to run (our girls used to play Barbies in the back of the van while Brian and I raced), I decided I’d better encourage Whitney while I had the chance! NFC Athletic Director Mike Posey indicated that there weren’t enough students interested in the program to keep it going last year and there wouldn’t be anyone to coach them even if there were enough interested kids, but he conceded to let me have a go at it anyway. After failed attempts to find a “real” coach, Brian and I took a collective deep breath and jumped in.

DAY: So where did you go to get your formal training as coaches?

JA: To the winningest coach in the Big Bend, Gary Droze! Without his support, we would never have had the courage to embark on such an ambitious mission. Mike Posey was also extremely encouraging and helpful with details pertaining to the Florida High School Activities Association (FHSAA). Books, such as Training for Young Distance Runners by Greene, Pate, and Greene and XC websites are helpful, too, but nothing compares to watching and doing, right in the thick of things! Having grown up overseas, I really didn’t know the ins and outs of high school sports here in the states, so Coach Corbin was instrumental in providing me with the details regarding how varsity athletics work. He’s the competitive half of our duo, which balances us nicely.

BC: Our “informal” training, which consists of years of running experience, child-rearing and classroom control, is immeasurably valuable to our coaching.

DAY: When did you start coaching?

JA: The 2001 XC season was our first, after which I assisted with the distance track team during spring, 2002.

DAY: What do you think the most important task you have to accomplish as a coach?

JA: Encouragement, development, and improvement of each runner as an individual.

BC: Keep the kids excited about running, and the results take care of themselves!

DAY: So, what did the team look like when the season started this year?

JA/BC: We had dubbed ourselves (privately, of course) the “Bad News Bears XC Team” at the beginning of the season, because as young and inexperienced as our runners were, we stood out in a crowd and that wasn’t always a positive thing. We have certainly abandoned that nickname now, although true to the story, our team rose to the occasion!

DAY: Give us an example of a typical early season practice week?

JA/BC: Not being as lucky as a couple of the schools that have trails in their back yards, we take a school bus over to Forest Meadows a couple of times a week for a four-mile run. Tuesdays we do speed work on the track. Thursdays we use several different measured road courses (3-4 miles each) from our campus. Fridays are usually reserved for games like Ultimate Frisbee and Sharks and Minnows that provide a workout but are a fun diversion from the usual training runs.

DAY: How many kids stuck it out? What kind of progress did you see them make?

JA/BC: All but one runner hung in there with us throughout the season. The progress was tremendous, so it was really fun to track. We watched runners who couldn’t go more than a mile at the beginning of the season take as much as 10 minutes off their 5K times by the end. We also tracked the progress of those who had returned from last season, and the strength, maturity, and thus improvement that one year provides is amazing!

DAY: What was the most challenging part of the job?

JA: Constantly reiterating the fact that we are a young team, so that coming in low in the rankings would not discourage our runners from doing their best. Young people like to win, and it was hard to get through to them that they were a bit unevenly matched with their competition.

BC: Figuring out which “whines” were real issues and which were just non-motivated individuals needing an extra push.

DAY: The most rewarding?

JA/BC: Watching as our team members and even their families caught “the running bug” as we shared our love of the sport. Seeing them run harder and faster as they realized their successes, and watching them run PR (personal record) after PR at XC meets. And, of course, having both the girls’ and boys’ teams qualify for and run in the regional meet!

DAY: Is there a success story that rises above the rest?

JA/BC: Several, actually, as one of our runners lost 30 extra pounds and gained great self-respect, while others who originally weren’t sure they’d ever be able to go the distance in a race scored for our team at both the district and regional meets. Of course, having my own daughter run and improve as much as she has is a huge success story!

DAY: What was the high point of the year?

JA/BC: I think we speak for everyone, parents and runners alike, when we say that qualifying for regionals was the highest of many high points throughout the season. Both qualifying teams were comprised predominantly of sixth and seventh graders, with one eighth grader and one tenth grader on the boys’ team; consequently, we were running against mostly bigger, older kids and that made the victories all the sweeter!

DAY: What is the forecast for the future?

JA/BC: The sky’s the limit! One of the best things about having a young team is the fact that it can be built into a mature, winning team! If these young runners stick with the program for the next several years, we should easily qualify for (and win!) the state meet! We have a sixth grader right now who runs times that are comparable to Ryan Deak’s when Ryan was 11 years old, so we’re just hoping we can keep everyone interested and uninjured for the duration.

DAY: If a GWTC member reads this and is motivated to start a program or help out with one, what advice would you offer?

JA: The best person to talk to about that would be GWTC member Christy Carson, who was a wonderful help to us throughout the season, “sweeping” at Forest Meadows to be sure nobody got left behind or lost, and helping me coach at meets. The most important thing is to stay positive, give advice that you yourself would follow, admit mistakes and correct them, keep things fun, and pray for wonderful support from friends and team parents like Brian and I had this season! So many Gulf Winds members helped us in so many ways, from simply offering positive feedback and moral support, to physically working at the varsity meet NFC hosted in September, to helping us financially through the Chenoweth Fund.
Thank you, Gulf Winds Track Club!