Members That Make Us Proud – The  Annual Awards Ceremony for 2022

2022 is the year that Gulf Winds Track Club (“GWTC”) and its membership began operating at full speed again after COVID set things back.   That means a lot of people needed to step up as volunteers to keep an orderly flow of fun and running moving. No one can say how long it will last but 2022 provided us all with some good times.

Among those who stepped up, there were some that went above and beyond what was expected, either through their competitive performances or by the help and assistance they provided with club events, or both. The job of the GWTC Awards Committee was to sift through the nominations for the awards and a year or more’s worth of contributions and performances by GWTC members and pick the best for each award. That is, of course, a subjective process. Many people are worthy of these awards, but the award winners have stepped up to earn their recognition. 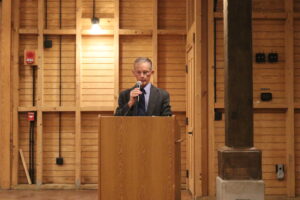 The Awards Committee, which is often referred to as the “hardest working Committee” in the club,  includes Mark Tombrink (the chair), Heather Vickers, Keith Rowe, Kat Sack, Mike Savage  and Philip Sura. Members serve three year rotating terms. Tombrink, Sack and Sura finished their third year and are stepping down shortly after the Awards Celebration.  Heather Vickers is also stepping down as her term as Vice President ended and so too her term on the Awards Committee.  The awards presentation was held at Goodwood Museum and Gardens.  Bill McGuire was the Emcee.

On January 8th, 2023, the 2022 Awards Committee recognized the following GWTC members with an Award[1]:

The Male Triathlete of the Year was presented by Brittany Vermeer to Matt Vermeer and the Female Triathlete of the Year was presented by Tina Bahmer to Kory Skrob. This award is given to both a male and female GWTC triathlete, active in the club, whose love of triathlon is demonstrated not only in competition, but also in commitment, service and inspiration. This award was first given in 1999.

The Community Award was presented by Jeanne O’Kon and Lisa Unger to LULULEMON. The bylaws provide this award goes to an organization or individual who over a period of years, through financial or other contributions, has supported running in the community at large.

The Cleveland Caldwell Advancement of the Sport Award was presented by Judy Alexander to Elizabeth Kamerick. The award is given in recognition of someone who makes significant contributions to the advancement of the sport, whether through research, education or some other area of expertise.

The Bill Lot Volunteer of the Year Award was presented by Mary Jean Yon to Fran McLean.  It goes to a person deemed representative of those club members who contribute hours of time assisting in club activities and who often go unrecognized by the club at large.

The Race Director of the Year Award was presented by Heather Vickers to Allen Blay. The award goes to recognize a GWTC member who has taken a major responsibility in production of quality events, especially those favored by GWTC runners, whether by initiation or direction of the event or by coordination of a major aspect of such event.

The GWTC “Runner of the Year” award goes back at least until 1978 when Janice Gage (now Hochstein) and Tim Simpkins won the award.  The award recognizes the member who “besides achieving outstanding times in the past year at various distances in local, regional, and national events, [has] served as [a] model for all of us in their competitive spirit, their continuing devotion to the sport, and their support and encouragement of their fellow runners, both individually and as members of Gulf Winds

The Hall of Fame Award was presented by Mark Priddy to Lisa Unger to mark her entry into the GWTC Hall of Fame – the 44th person to be so honored.  To be inducted into the Hall of Fame a person must have brought respect to the Gulf Winds Track Club through their contributions, activities, and running accomplishments and have played a major role in shaping the ideals of the club.

The Awards Ceremony is one of those events where I some time say to myself: “I am tired, I think I will stay home.”  Thank goodness I talk myself out of that decision because every year, the Awards Ceremony reminds me of what is so special about GWTC – it is the fantastic people who pull together to make good things happen.

[1] Keep checking back as we will be adding links to this page to take you to the individual awards presentations.