The 2022 Bill Lott Volunteer of the Year Award – Fran McLean

The Volunteer of the Year award recognizes someone who has contributed hours of time assisting in Club activities. But how about somebody who has invested YEARS in volunteering for club activities? This is the case of this year’s award winner. They run many of our Club races (and runs them well, I might add) but there are also a few selected races where this person has been a dedicated volunteer and refuses to give up their post. Case in point: This person has been a constant registration volunteer with the Women’s Distance Festival 5K ever since Lisa Unger took over as the Director of the race. That’s 12 years, maybe more. Oh, and this person usually runs that race after standing on their feet for close to two hours. 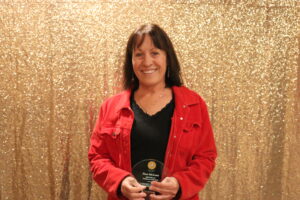 Volunteer of the Year – Fran McLean

The Potluck Bash and the Rex Cleveland Magic Mile have also benefited from this person’s registration help for more years than one can count. But lest you think this person is just a “registration girl,” let’s look at the Tallahassee Marathon where she and Ray Hanlon practically owned the 9-mile water table in J. Lewis Park for at least 9 years. When the marathon course moved downtown, so did this Dynamic Duo where they manned a relay exchange point in Cascades Park. And let’s not forget Turkey Trot. In 2022 year, we celebrated running the race at SouthWood for 20 years and guess who has been there with us each of those years. Yup! It’s her.

When I asked Ray Hanlon about this person, he loaded me up with stories about all the early races that she helped organize and put on. He summed it up by saying “She stays behind the scenes and acts like she’s doing nothing…but she is!” The best story I heard was that one of the races the aforementioned Dynamic Duo put on was the Tom Brown Bash in 1990 which just so happens to be the first race where this award’s namesake, Bill Lott (who was new in town), ever volunteered for a club race.

The “race” that many of us associate her with these days is the Wilde Mountain Scramble which is held on New Year’s Day. The race organizers pride themselves on being non-conventional. Cheating is allowed. Whining is strictly forbidden. We are guessing the race has been going on for at least 25 years and one person who has likely run most of those years is Gary Droze…who many also regard as non-conventional. Gary says his favorite edition of the race involved a pompous national class runner who was dismayed to learn that a mixed-breed dog bested her for top honors. Our girl…and let’s just go ahead and say her name…Fran McLean…responded to the distressed diva’s complaints by reminding her of the Wilde Mountain Scramble’s Number One Rule: No Whining! As Gary says, Fran, You rock, and I sure agree.

Please join me in congratulating Fran McLean – the 2022 GWTC Volunteer of the Year!