Connie Clarke – How do you make that 5K hum so nicely?

A Conversation with Connie Clarke – How do you make that race hum so nicely?

The Shamrock Scurry is not formally a Gulf Winds’ race, but it operates like one – like a really good one. It is Killearn Methodist Church’s gift to our community and a way of raising money to support mission work its members take part in. And it has Connie Clarke as its leader and co-race director. I had the opportunity to explore some of what makes this race special with Connie.

1. How long have you been involved with the Shamrock Scurry? In what roles? 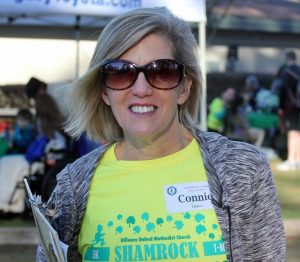 Almost 10 years ago, I was approached by Chris Smith, our Director of Missions, who realized the Scurry did not take place that year. He wondered if Killearn Methodist could get it started again as a fundraiser for Missions. Since I had participated in several road races and had been an event coordinator in a previous life, I tried to best explain how much work that would entail. I wanted him to understand so he could make an informed decision as to whether it would really be worth the effort. He convinced me we could do this and we immediately found someone to co-chair with me and we began building our Scurry team. We looked for a doable route that would not involve the traffic circle and, in the end, Bill McGuire convinced us to use the original route with some amending to include the traffic circle. I have been the co-race director for 9 years now.

2. Would you describe how the race is organized, the church’s role in it and the primary purpose or goal of the race?

We have committee chairs for each area of the race and encourage them to have a co-chair or at least an assistant. They contact the volunteers who have helped in their area in past and we also have volunteer recruitment beginning 5 weeks before the Scurry. This takes place in our courtyard on Sundays between our church services. We also recruit on-line. As you know, the Scurry began at Killearn Methodist Church in 1981 and many of our church members were a part of it during those early years. Our church supports these efforts by allowing us to utilize the entire campus, and providing buses to transport volunteers from an off-site parking area on race day. Our volunteer base is primarily church members. We also require all of our church members (whether volunteering or running) to park off-site so that we can have ample parking for our visitors.

We have 2 primary goals:

-To be a welcoming presence to the entire community by presenting the love of Christ without being too “churchy.”
-To raise money for missions outreach at Killearn United Methodist.

3. Do you feel it has been successful in achieving those goals? Explain.

We feel we have been successful. We have received many comments of how hospitable and welcoming our volunteers are and have also had folks come back to check out our services and programs. We also ask that our volunteers attend one of our 2 volunteer training meetings where they are given history and information for race day. We remind them that we are all on the hospitality committee. They also have a chance then to meet with their committee chairs so that many details can be handled before chaotic race day!

This year we were approached about a week before the race by a woman who has been wheelchair bound and wanted to walk the one mile with her special exoskeleton body brace. This involved finding an alternate route that was flat and involved extra traffic logistics. Our team made it happen, only to be humbled by her determination to “finish the race.”

We netted over $22,000 for our Missions Outreach last year and think that number will be higher for this year! Chris Smith has also done an excellent job in building generous sponsors.

4. It is one of Tallahassee’s larger races, isn’t it? Any idea why? How was this year’s crowd?

Yes, we are one of the largest races in Tallahassee. When this race first began in 1981 under the direction of Lamons and J.D. Warren, it was known as a well-run event with accurate timing. We strived to uphold those high standards when we brought the race back in 2010, and of course, we had to include our signature pancake and sausage breakfast!

We had a wonderful crowd this year with 164 one-mile finishers and 511 finishers in the 5K. (This was not our largest crowd, but the race was not designated a Grand Prix event this year.) We also had over 130 volunteers on campus and many others to cheer their friends and family!

5. The race has a unique award doesn’t it? Explain

We remembered Mike Schneider, a special member of our church and of the running community, when we brought back the Scurry in 2010. We were able to get some of his old race tees, and a member of our church made a quilt. We presented that to his family during the awards.

Since then, each year, we present the Mike Schneider, Spirit of Running Award to someone we feel embodies many of Mike’s characteristics as an encourager and role model for the running community. Of course, David, you have been recently honored with this award and this year we presented it to Herb Wills.

Yes! I look forward to 2019. When I think it is time to turn over the reins to someone else, I remember how much fun I have and how worthwhile this event is. Mona McGregor has been my co-chair for the past several years and does a wonderful job at keeping so many details organized, and even designed our awesome tee shirt for the past few years. We are blessed with great committee chairs who attend to the many race details in their areas and they are the real reason this event is often called a “well-oiled machine!”