COVID 19 closes Eglin AFB to runners for another year… 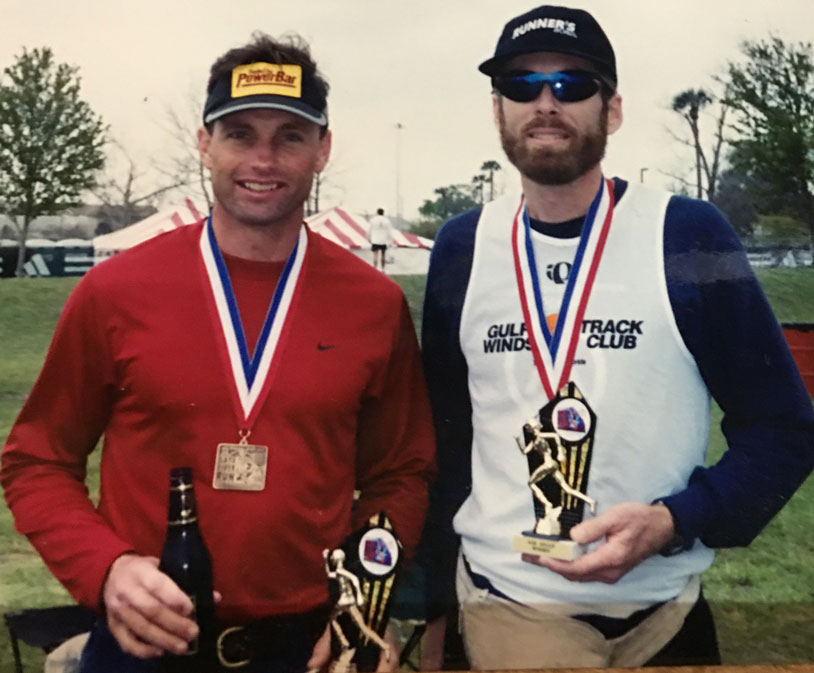 COVID 19 closes Eglin AFB to runners for another year…

I feel powerless from the belief that I may never again get to enjoy the Eglin AFB Gate to Gate 4.4 Mile run and post-race party that for years have commemorated Memorial Day, our national holiday of remembrance…

The COVID Pandemic has disrupted the annual road race again, so 2021 will see another footrace-free Memorial Day weekend at the AFB. So, the origin of the 15-year history of the “100 Brats N Beers” post-post-race party that began in 2003 and was held through 2017 on Eglin Air Force Base at a recreational area called Post’L Point & Camp Robbins is where this story will start.

In the early 2000s, a NW FL runner named Don Henderson had a tradition of holding outstanding post Gate to Gate event parties at his backyard pool, and 2002 was one for the history books!

Some background to set the scene: A few weeks before the 2002 Gate to Gate race, my friends Jim Frazier and Tommy Kunish had an intense one-on-one battle for the Fiesta 10k win in Pensacola. Jim had probably talked with Tommy all the way down the 12th Ave “Tree Tunnel” asking the then twenty-one-year-old FSU harrier how his training plan was going. I am sure the confident young gun had a moment or two of concern when Jim made the turn onto Cervantes St., knowing the McDonalds & Krispy Kreme breakfast aromas made this Jim’s favorite part of the course. Tommy was able to use his strong college legs on the Palafox downhill stretch to put a few seconds on Frazier and claim the race victory.

Gate to Gate is known for its magnificent and patriotic eagle trophies, which are highly coveted, and became the source of a sub-competition between Jim and Tommy.  As the story goes, after losing to him at the Fiesta race, Jim was quick to quip to Tommy at the start line of the G2G that “Whoever wins the biggest Eagle trophy today will have the LOSER chug a beer off the back of the winner’s Eagle.”  Tommy didn’t back down from the opportunity or the challenge, but he finished fourth that day. Although Jim finished a few seconds behind Tommy, he won (yet another) undisputed Master’s Championship.

McGuire’s Irish Pub fielded two Open teams that year, and Jim and Tommy had each joined one.  Not only did they compete against each other, they also competed on dueling McGuire’s Open teams!  In 2002,  Jim’s team got the better of Tommy’s team. 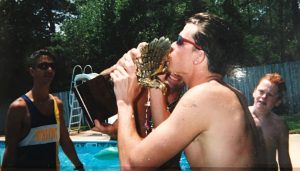 Back at Don Henderson’s post-race pool party, Tommy was a good sport in following through with the bet payoff. The photo is from that last post-race event held at Don Henderson’s home after the 2002 Gate to Gate event.  Jim is there in the picture of Tommy drinking from the eagle, making sure Tommy got a good grip on that eagle’s wings!  Frazier was pouring the beer directly down Tommy’s throat as Michael Kohler closely monitored for the “no spills” clause.

Maybe it was the beer talking, but “Good Times Jim” decided that day that more ways to have post-post-race fun on Memorial Days to come should be made since Don Henderson was moving.

Jim and I were positively moved by the great Memorial Day Holiday atmosphere that permeated all of the events that day in 2002. We were moved to such a point that we started planning the first-ever Gate to Gate Post’L Point Post-Post Race party for 2003 as we drove away.

When Memorial Day came around again in 2003, we began to prepare for our inaugural event.  We decided on the name of the party when we visited the Eglin Commissary to shop for provisions a few days before the race.  Jim was excited to find some New York Bratwursts in boxes of 20 to go along with the 100 beers we got and thus the “Post’L Point 100 Brats N Beers” party was born. Somehow, I got tangled up in a bet with Frazier for the Gate to Gate race loser to do the grilling at the party. That ended up being me for so many years that I finally had to bring in a friend to help.  My pal, Michael Powhida, joined us at the Base to handle my losing bet grilling chores for several years. I think Jim felt sorry for me losing that bet every year and introduced me to his good friend, Rex Smith, who took over handling those hot cooking chores for another stretch of years, always with a congenial personality and a never-ending smile. In 2017, NWFTC’s John Sanderson volunteered to do the cooking.  Thank you to all our party grill chefs who have helped make this 15 year stretch of holiday post-post-race parties some of the best ever!

The post-post-race party started as a little cook out with Tim and Jim, but quickly grew to a large gathering funded by partners NWFTC, GWTC, PRA, Results Event Timing, Inc., and the Capt’N Fun Runners.  From 2003 until 2009 when the race actually covered the Base from Gate to Gate, we made Post’L Point our post-post-race event destination.  In 2010 when the event moved the race finish line to the West Gate and the course became a loop, we moved the party to the Choctawhatchee Bay.

There we enjoyed swimming in the bay and the view over Destin from Camp Robbins.  At the height of this event’s popularity, we enjoyed the comradery of friends,  old and new, from throughout the entire Southeast. We all were awed by the exciting flyovers by the military fighter jets that we watched from our shady location overlooking the bay.

In 2015 we returned to the calm beautiful Post’L Point beach where it all began, and we stayed there until the last party in 2017.  In 2018 the race was canceled due to Panhandle landfalling Tropical Storm Alberta. In 2019 organizers made it impractical for out-of-town runners to attend by requiring race credentials to be picked up the week before the event, essentially requiring 2 round trips to the Base and back.  COVID sidelined the event in 2020 and 2021.

The bottom line to this story is it couldn’t have happened without James Frazier. I am forever blessed for having known this wise, talented, and kind man.   Maybe next year NWFTC and GWTC will be able to coordinate a 2022 commemorative 5-year reunion…. Open club teams going head to head, trying to collect a flock of eagles. 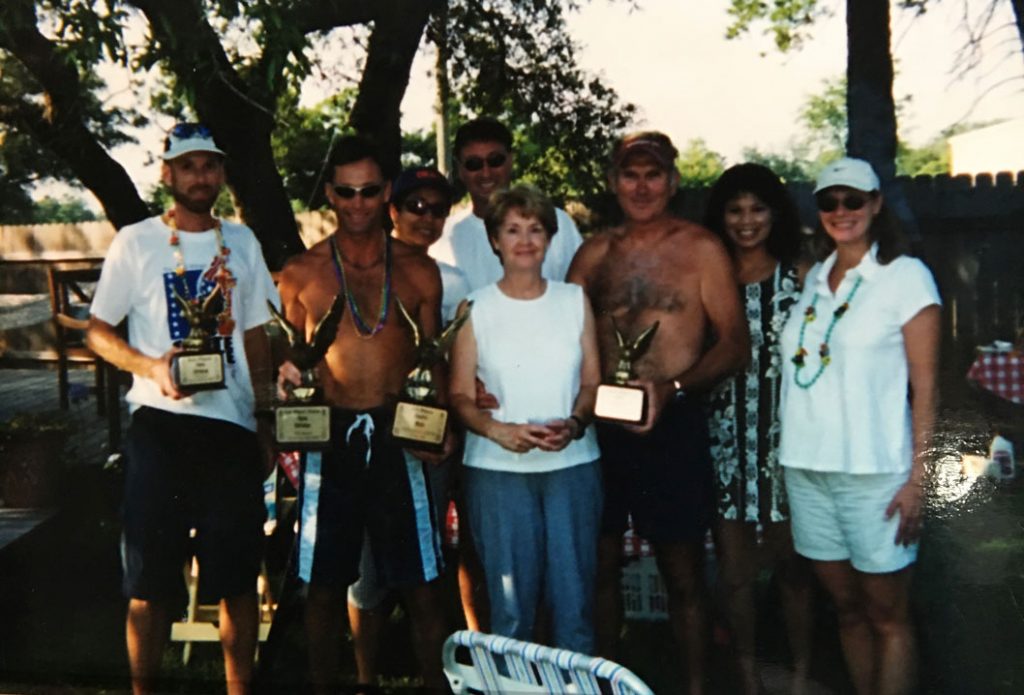