‘Dillo on the Half Shell

A View from the Top
‘Dillo On The Half Shell

Another spring into summer here in the deep South and I am astounded, as usual, about all the carnage of crunched and crushed critters I see all over the roads. I usually stop and try to gently move them off the road into a ditch or into the tall grass. It bothers me to see them laying out there getting flattened time and time again by passing motorists. Seems disrespectful. I have certainly hit some myself from time to time and feel terrible about it. The sound and vibration of my tires squashing some poor fellow traveler here on Spaceship Earth is dreadful.

Usually it is squirrels and honestly, I don’t feel all that bad. Birds bother me more. Cats and dogs are sad. Flat snakes too. Once, running in my neighborhood around a lake, I found an incredibly beautiful beaver that had just been hit, laying on the side of the road. His coat was soft to the touch and shone beautifully in the sunlight. I thought that this was a prize worthy of the taxidermy man, and I ran the mile home as fast as I could to get my car and pick him up. When I returned one of my neighbors had beat me to it and he was gone.

A few weeks ago I saw this equally handsome little red fox laying out on a busy roadway. I dodged drivers to retrieve the lifeless body and I hid it in a ditch, so that I could return later to pick it up, but the run was long and the vultures quicker than I imagined. So much for that guy.

Once during a long run from Bradley’s to Georgia and back on Old Centerville Road, I passed a big bobcat in the roadside ditch. I see bobcats here from time to time, sometimes near Lake Jackson, another time while marking the Pine Run course one year, we saw a family consisting of a mother and three young kittens. They are so secretive, you look at them one moment and then the next, they have melted away. So fast that you have to wonder whether you ever saw them in the first place. Well, I ran right past this guy and then just about wet my drawers from the shock and surprise when it registered in my oxygen deprived brain. They are so much bigger when you are less than 5′ away!. He was in the ditch but he was standing upright against the side wall of the embankment. I thought that he was alive at first and started to quickly back away, then I could see his lifeless eyes. Such a gorgeous creature, so full of life and guile, speed and grace, but I will never forget the haunting dead eyes. I thought about picking him up and getting him mounted. The very thought was a sacrilege, so I never went back. I was satisfied and more from the mere memory of his majestic being. 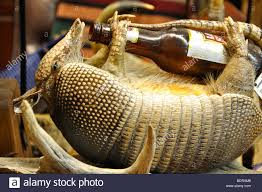 It isn’t always that way though, and I have a less respectful relationship with armadillo. They are efficient miniature land movers and will dig up your garden in no time flat. I will shoot them if given the opportunity and they are impressively fast for a short burst with a butt full of buckshot. On a somewhat lighter note, I saw one once, laying on the side of the road while I was running a road race in Dothan, Alabama. He was cooking slowly in the hot sun and just stunk to the heavens. He was laying on his back with those stumpy legs sticking straight up, and some enterprising redneck had stuck an empty beer bottle in his mouth and between those little front legs. He looked all the world like he was dead drunk. I can honestly report that you cannot run when you are laughing that hard.

But I don’t understand their native attraction to cars and trucks. I mean, a few weeks ago I was running a seven mile stretch on a deserted Miles Johnson Road, in the eastern part of the county. Out in the middle of nowhere, I hadn’t heard or seen a car or truck all morning long. A car approached some distance away and at the very moment it got close enough to me to be a hazard, this dopey armadillo suddenly bolts out of the forest from the other side of the road and runs right at the car wheels. The driver, obviously startled, instinctively snatched the steering wheel to the right, steering away from the suicidal armadillo and directly at me, instead. I dove left for the side of the road, The armadillo executed a quick 180 and ran back into the woods, the driver slammed on brakes and swerved away from me, back to the center of the roadway and drove away. I stood up. The armadillo immediately made another sudden frantic dash across Miles Johnson Road and ran into me ankle high at full speed, knocking me down when I tried to skip over him, for Baryshnikov I am not. I got up and started sprinting down the road to get away from that demented creature, who then came back out of the woods from behind, turned left and then ran right past me on the shoulder of the road before he swerved back into the woods, gone for good. This is an unusual way for you to check your max heart rate and I do not recommend it.

I imagine that was some sort of payback. Years ago our son, Corey, left Tallahassee for school in a frozen Ann Arbor, University of Michigan. After a few weeks of cabin fever he decided to return to the South, but needed to finish out the semester. After his finals during a gray northern December, I flew to Detroit and then rented a car and drove to Ann Arbor to bring him home, a two day drive. We stopped near Knoxville, Tennessee for the night and the next morning while driving on a deserted little two lane near Fitzgerald, Georgia, from 100 yards away, we watched an armadillo run out across the road for no apparent reason whatsoever, and directly under the wheels of an approaching junker of a pick up truck. I imagine that he had been waiting patiently for hours for that truck.

Corey looked at me with a wry smile and said, “Now, I finally feel like I am home.”

Hey, it was a ‘dillo. Think of the vultures.