When you step off the plane and walk into the Eugene airport the first thing you see is “Welcome to Track Town, USA.” There is no doubt this place deserves to host the Olympic Track Trials and the moniker “Track Town, USA.” For most of us, being a track and field fan is certainly not main stream. Despite FSU’s rise to the top of the college world of track and field, tell someone in most places you are a fan of the sport and you might get a response like “I like the Olympics too.”

Eugene, Oregon is different though. There is a passion in this town for the sport, whether it is an Olympic year or not, that has been built layer by layer, year by year since Bill Hayward took the reins of the Oregon track and field program in 1904. The foundation he laid provided the support for the legendary Bill Bowerman, a host of all Americans, and a track venue that has hosted three Olympic trials, nine NCAA championships and six USA championships. 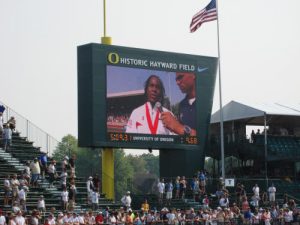 Oregon University head coach Vin Lananna is now charged with oversight and the trials are big part of his vision for Eugene.

Bowerman, who died in 1999, was the perfect fit for this northwest community and the driving force for turning Eugene into the track capital of the country. His crusty, but fatherly, oversight produced four NCAA titles for the University of Oregon, 31 Olympic athletes, 51 All-Americans, 12 American record-holders, 24 NCAA champions, and 16 sub-four minute milers, including one of the best US runners of all time, Steve Prefontaine, who is remembered with trails named after him and memorial (Pre’s rock) marking the spot where he died. Bowerman is generally credited with bringing the “jogging” movement and running boom to America from Australia Arthur Lydiard. The evidence of this legacy winds through Eugene in the form of a beautiful trail system that crisscrosses the Willamette River over a series of pedestrian bridges and has inspired many to run over both woodchip and paved trails, including “Pre’s Trail.” Coach Bill Bowerman turn his passion for improving his runners shoes into a business with one of them, Phil Knight, to found a company called Nike.

More than anything else, there is a very special bond between the people of Eugene and the athletes who live and train in the area. Any competitor who has the big Oregon “O” on their chest while competing simply has an unfair advantage as the roaring crowd will push, pull or lift them to faster times, longer throws and jumps and greater heights. While the crowd cheers for everyone, there is something special when the competitor wears the green of the University of Oregon or the uniform of the Oregon Track Club Elite. The intensity of the crowd at the Olympic trials “willing” 800 meter running Nick Symmonds through a small crack in the wall of runners blocking him in on the rail during the 800 meter final blew him through the crack without touching another runner and ignited his blistering kick which drove him past all the other runners to the win. In his vortex followed fellow Oregonians Andrew Wheating and Christian Smith for an unlikely sweep that would not have happened anywhere else. It was as intense as any of the great Miami-FSU games I have watched and maybe the highlight of our trip.

There are places in the country that are hallowed grounds to their sports fans: Wriggly Field and Fenway Park in baseball, Augusta National in golf and Lambeau Field in football. None have anything on the rich history and magic of Hayward Field though. No doubt the Olympic track and field trials have heightened the interest and brought the intensity to a new level in Eugene, but make no mistake, there is no place in the country, maybe the world, where such a high percentage of the population knows and understands the sport. It was a great place to spend a long weekend.