GWTC Team Races over the Bridge 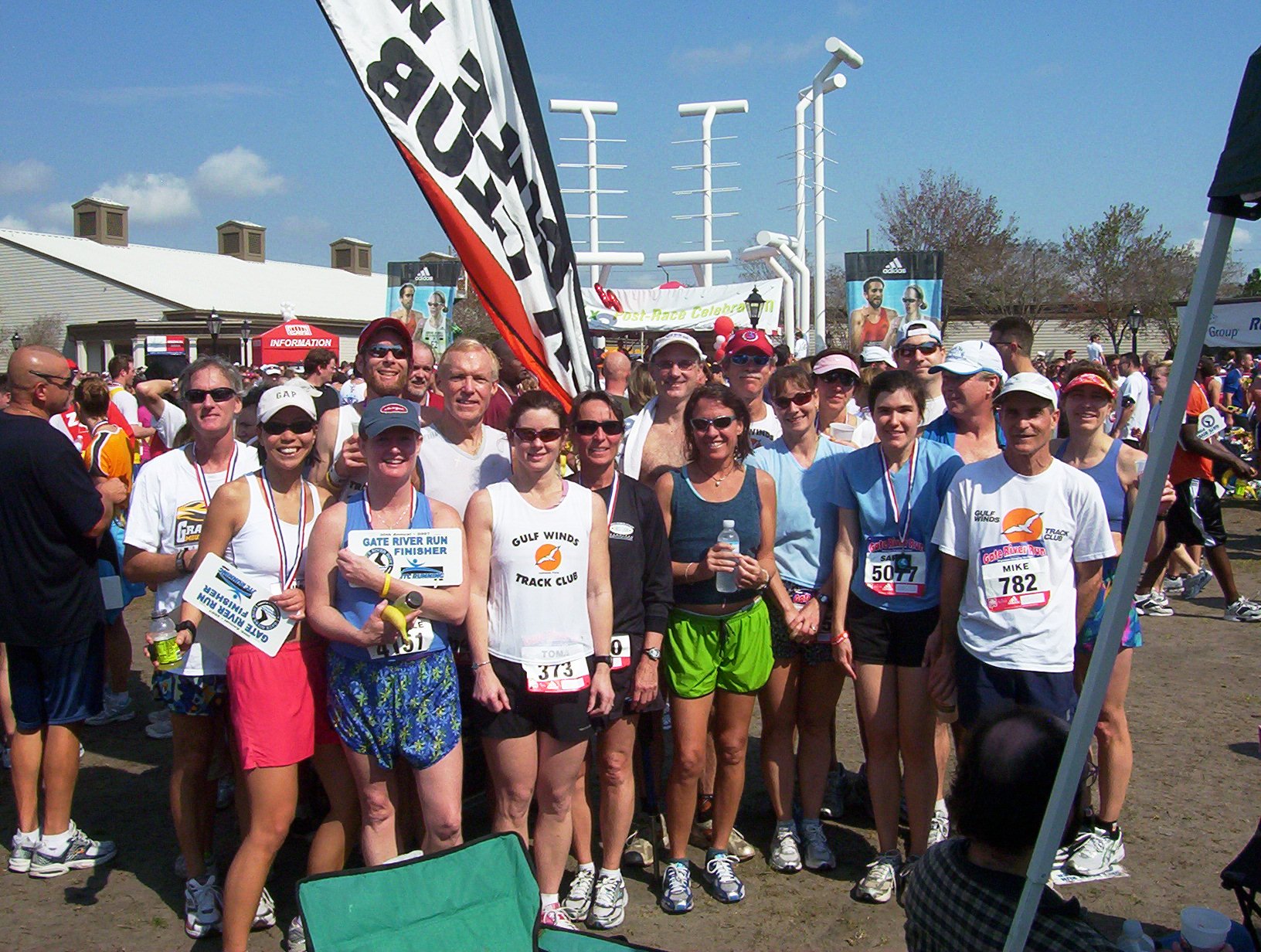 The 30th running of the Gate River Run 15k held in Jacksonville on March 10th was the first event of the year for the GWTC Racing Team. The event covered 9.3 miles of a rolling street course that traversed neighborhoods, parks and finally the Green Monster, also know as the Hart Bridge, to end behind the Jacksonville Jaguars stadium at the Jacksonville Fairgrounds. There was a fitness expo before and after the race and also a great post race party. There were lots of giveaways at the expo, at the race finish line and also during the post race party. A huge cake was baked and decorated in a replica of the race course as part of the 30th anniversary celebration. A live band provided entertainment and the top runners were honored with cash awards. Deena Kastor was the female winner in a time of 47:20, missing her American 15k road record by 5 seconds. She is the first female to win this event 5 times and also the first woman to win the Equalizer Bonus. The Equalizer is a special award given to the first finisher, male or female, with the women getting a five minute head start. In the four years that the equalizer has been offered, this is the first time a woman has claimed the first finisher title. The second place female finisher was Jen Rhines in a time of 48:58. The men’s winner was Meb Keflezighi, who finished in 43:40 and the second place man was Ryan Hall in a time of 44:01.

The GWTC group looked professional again this year with the club banner hanging from the shade canopy and feather-flag waving. The team also enjoyed a private stash of cold beverages and post race pizza. According to the official race results, over 120 people from Tallahassee completed the event which finished with a new race record 11,326. About 25 of those runners were included on the official GWTC Racing team entry form. While the teams finish places were not spectacular this year, all participants seemed to enjoy the event. The final team results placed the GWTC women fourth of ten women’s teams and the men placed sixth out of twelve men’s teams. There were also 46 corporate division teams entered, for a total of 68 teams. From an overall viewpoint, the GWTC men placed 8th and the women places 13th of the 68 total teams. The scoring members of the GWTC women’s team were Sheryl Rosen, Fran McLean and Julie Clark. The scoring members of the men’s team were Tim Unger, Dan French and Bill McCord. See www.1stplacesports.com for full results.

The next team racing event is the Azalea Trail Run on March 24th. The team entry has already been completed and includes Fritz “Young Gun” Stoppelbein, who joins the GWTC “Masters” racers of Bill McCord, Hobson Fulmer and Tim Unger. The men will compete in the event’s open competition. If you have never run this historical 10k, please consider it for next year. The course is flat, fast and lined with enthusiastic spectators. The pre and post race expo and party are always enjoyable and offer a variety of amenities. Find more information about this race at www.pcpacers.org/.

Make your plans now to help GWTC defend our team racing title at The Gate To Gate 4.4 mile event on Eglin Air Force Base Memorial Day, Monday May 28, 2007. If you are interested in a team racing opportunity or have other questions, please contact me any time.