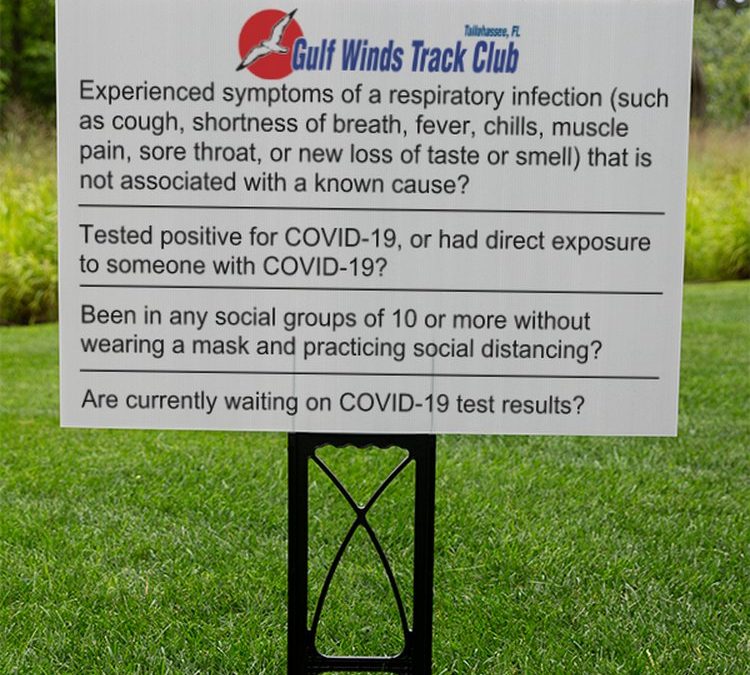 When you want to tackle a difficult task, it is most helpful to have the right team and, if you can, the right time and place.  It has been nearly a year since GWTC produced a live race.  The GWTC Triathletes hosted a duathlon (run, bike, run) in October 2020. Before that it was the GWTC Flash 12K-6K in February of 2020.

The GWTC 30K-15K is a race with a lot of good history. It was first run in 1978 (the 15K was added in 2006) in a national forest south of Tallahassee. And it has been run through two of Tallahassee’s most beautiful places – the St. Marks National Wildlife Refuge and since 2006, the Red Hills along Old Centerville Road and, for the 30K, Sunny Hill Road. It is a “runners’ race” and it has two experienced co-directors, Jillian Heddaeus and Zach DeVeau, who were willing to make it happen.

Runners are longing for a chance to run races live and in person.  But they also do not want to expose themselves to the nasty virus, COVID-19, especially the B.1.17 version.  It is not an easy task.  But the race directors and volunteers did an excellent job complying with social distancing rules and other safety protocols such as wearing a mask.  There was no after-race party, the number of participants was limited to 100 runners in the 15K and 50 in the 30K (150 total) and it did fill up. Wave starts with 15 runners in in each wave went off every 30 seconds. There was also a 13-minute break in between the last 30K wave and the first 15K wave.  There was no race day registration.

The GWTC 30K and 15K races presented a chance to deliver a counter punch to Mr. COVID-19. The 30K race takes runners through the Red Hills of North Florida on Old Centerville Road right to the Georgia line. Just before the state line runners take a left and push on to find some of the toughest hills in this area.    The 15K keeps runners on Old Centerville Road the entire way.   It is a special place and the perfect race to start live racing again.

The 30K race was first run in 1978 on sandy forest roads in the Apalachicola National Forest starting at the intersection of Springhill Road and State Road 267.  It spent the next 3 years on Natural Bridge Road before moving to the St. Marks National Wildlife Refuge for the 1982 year.  One of the most beautiful places on earth, the race would probably still be there were it not for the minders of the Refuge deciding (understandably) in 2006 that the race was too disruptive to the Refuge.  Eventually it made its way to Old Centerville Road, thanks to Jackie and Jerry McDaniel who stepped in to direct the race.  The two places could not be more different – the Red Hills of North Florida and the marshland of the Panhandle coastline. One is flat as a pancake but very open to the elements (especially the wind) and the other is very hilly.

Back to 2021 and the new year.  The race followed the protocols for such events, relying heavily on  the Road Runners Club of America guidelines and applying them very conservatively.

“I was so pleased to see everyone comply willingly with the race protocols. The runners made it very easy for us to put on a successful event.

While we may be a ways away from attracting the number of runners at races that we used to, I do believe we can certainly get back to racing. All of the volunteers and runners at today’s race proved they’re willing to take the steps needed in order to provide as safe of an environment as possible for everyone.”

Michael Nesius won the 2021 30K in a time of 2:03:29. He was followed by Tristan LaNasa who finished in 2:09:39, clearly complying with the social distancing requirement. Katie Sherron easily won the top woman (and 4th overall) award in a time of 2:13:40. Jamila Allen was socially distanced behind Sherron with a time of 2:24:24.  Forty participants finished the 30K.

In the 15K, Leon Lions were running everywhere, including the top two males and second female. Jake Rogers and Patrick Koon took first and second in times of 51:15 and 52:12 respectively.  The top woman was Laura Dibella with a finish time of 1:01:53. Cross Country Runner of the year, Lilli Unger, was second. Eighty-six runners finished the 15K.

Hopefully, all of the participants felt like winners and none of them contracted COVID-19.  Thanks to all of the volunteers who helped make the event a success.

I go for a run here, on these clay hills,
In hopes that my feet will find,

The place where mind, body and soul
Sit, chat and share a cup of coffee.

Where sometimes friends drop in
To share in the sweat and toil of life.

Some places are that special.