It really is Pot Luck

One thing race directors learn quickly unless they are unusually fortunate is no one controls the weather and very few can predict it accurately. The Great Pot Luck Bash 4 Mile Run will always be a time to remember Paul Hoover, but the 2018 Pot Luck Bash will also be remembered for the downpour that turned the trails into rivers and the parking lots into lakes, despite weather predictions that made rain seem very unlikely.

The day before this year’s Bash, law enforcement arrested a man in Gadsden County and charged him with vehicular homicide and leaving the scene of an accident. It has been a little over a year since Coach Paul Hoover was killed by a speeding car while out for a run. The arrest is not the end, of course, but it does bring some peace of mind to many, especially family.

To celebrate Paul’s life, the course for this year’s race was designated the Hoover Trail. The corners and turns of the course were marked 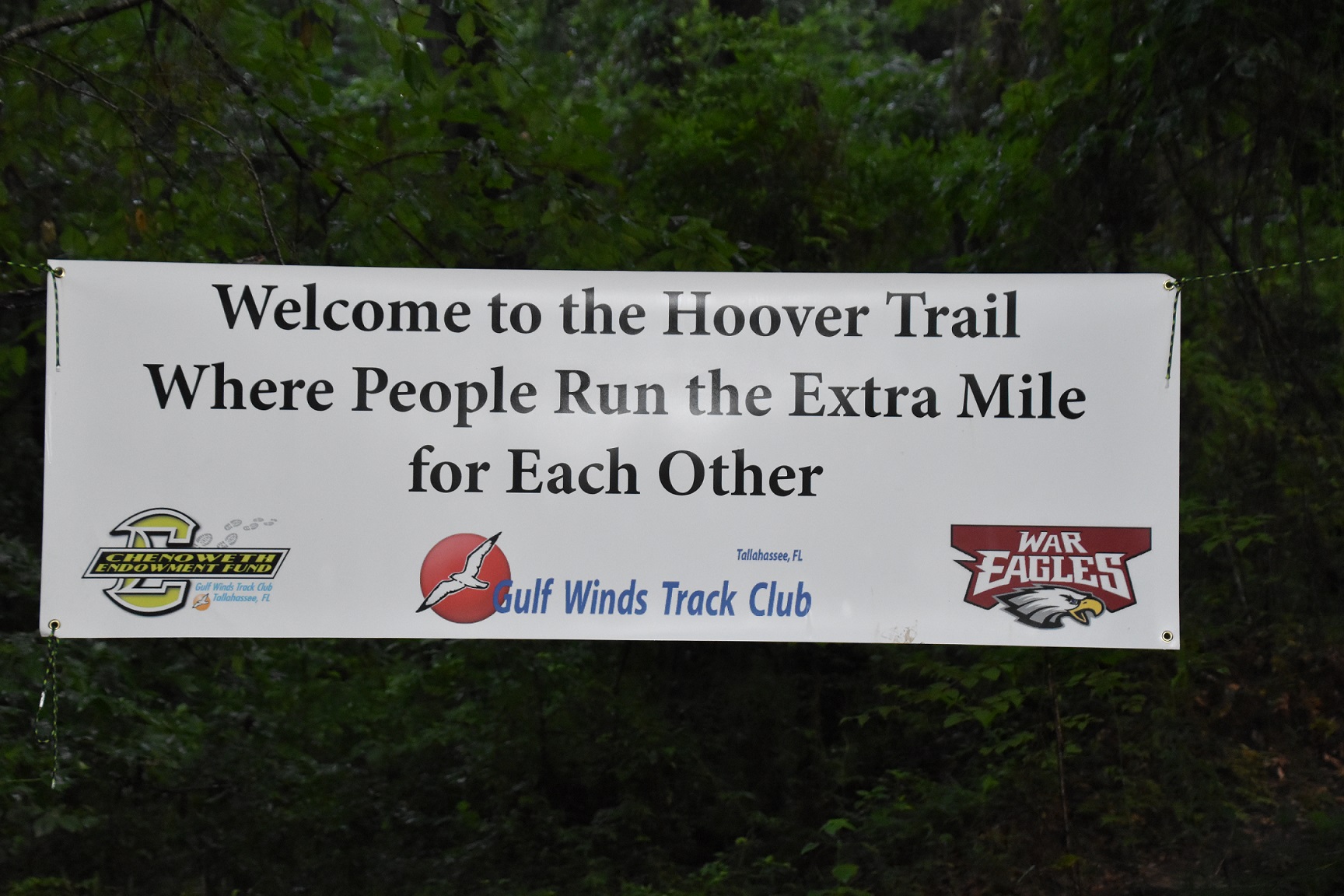 by signs that contained some of Paul’s favorite themes, many his own original creation, that he used when training the young men and women he coached. For example, “Running is 90% mental and 50% physical” and “Run the extra mile, it is never crowded.” The group of young people who attended this year’s Pot Luck are a strong testament to his legacy.

As runners gathered at the starting line, I looked up in the sky and saw a line of active clouds making their way toward our little group. Confident we were safe from rain, I never imagined what was coming. Instead, I called the runners to the starting line and gave the command to go. And indeed, they took off.

Because the Bash has a race committee rather than just a race director, I almost always have the opportunity to run the race. Toma Wilkerson, Myrna Hoover, Mary Register, Doug Bell and David Altmaier make a great team. One of our goals is to build a better connection between the community of youth runners and the members of Gulf Winds Track Club, not just by giving away awards and scholarships, but by creating opportunities for our paths to cross. And if there is a little rain involved, that probably all the better.

As the race got underway, I found my spot in the pack and began my journey around the course. It was not going to be a good day running for me, as I was beaten soundly by the half-way mark. I stumbled into the water stop and walked while I drank water. At the bottom of the hill just before the water tables was a Hoover Reminder – “It is not a hill, it is an opportunity.” That seemed so wise when I hammered the sign in earlier in the day, now as I let my opportunity slip away, it seemed the thoughts of a deranged person. Less than half a mile later, I ran into a group of runners coming from the wrong direction.

Meanwhile the skies had started getting noisy and dark. The air temperature dropped and suddenly it was as if someone turned the lights off. The night air was filled with lightning bugs. Big groans rolled across the sky, turning themselves into thunder before falling quiet. And then the lighting started to pop. I was the 92nd finisher out of 155 finishers. I can’t say for sure, but I believe the 91 runners who finished ahead of me did so before the deluge started and probably were still pretty dry when they crossed the finish line. But somewhere in that last quarter mile of my run the skies opened up and seemed to declare war on the ground blasting it with rain. I was soaked instantly. More thunder rolled across the sky and lightning bolts replaced the lightning bugs. I crossed the finish line shirtless and cold but worried about who was still out on the course. 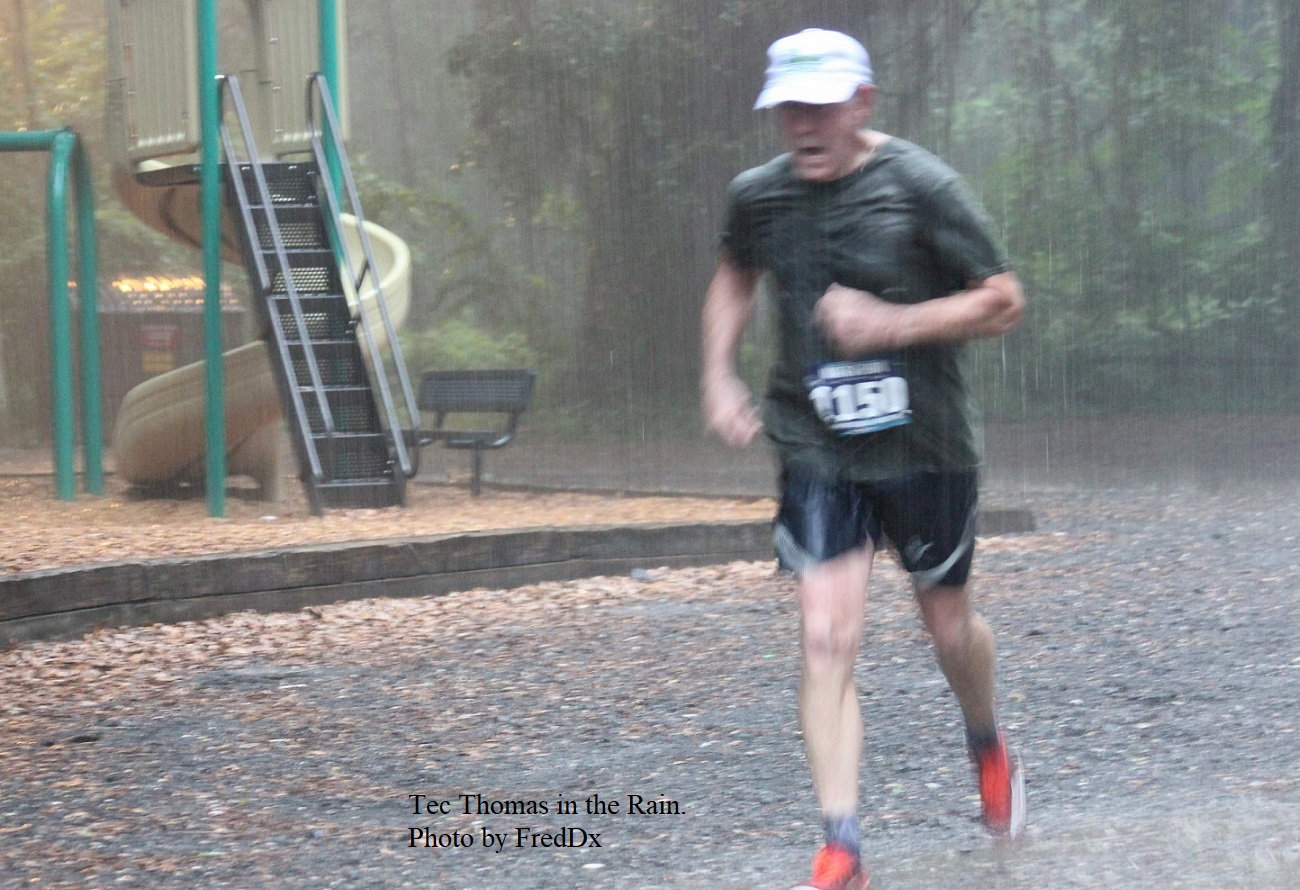 The storm continued relentlessly, perhaps following Paul’s frequent admonition – “Don’t stop running until you are finished.” Gary Griffin had the misfortune of stopping to check on me. He had the job of going out on the course to clean up. It was about to become a rescue mission. The weather was so bad, we climbed into his truck and headed out on the course to look for stragglers and lost runners. The fury in the sky grew and the driving rain punished everyone and everything it could. Lightning cracked everywhere, it seemed. The good news though was everyone seemed to have found their way to the finish line and while the conditions were horrid, the course was empty. In fact, we almost skipped a rough section of the trail near the end.

But we decided, “No, let’s just make sure.” The amount of water running down the trails was amazing. We moved cautiously ahead. It was very dark as we crept forward slowly. I am prone to hallucinations so when I thought I saw an unattached race number floating ahead, I was ready to ignore the illusion. As we got closer, a human form took shape behind the number. Barbara Hudson was standing under an umbrella that had done very little to keep her dry. As Gary rolled down his window, she hollered “Where is the trail?” She stood at the cross road of the trail where the chalk was either washed away or under a lot of rushing water. It took a good bit of convincing and a few more bolts of lighting and some promises (I couldn’t keep) about including her in the results to get her in the truck. After all, those grand prix points are special.

It was a Pot Luck to remember!

Nominees and Winners of the Chenoweth Awards.