“Reasonable things will never bring you as much joy as unreasonable ones do.”
― Zainab T. Khan, A Bucket full of Awesome 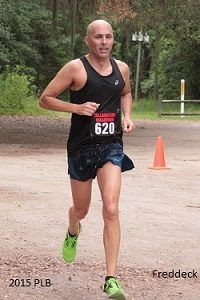 What ever happened to the break we used to get in the the summer time between Pot Luck Bash and Breakfast on the Track. I recall that the racing calendar thinned out during this time and we could limit ourselves to complaining about the heat at the Kiwanis Melon Run and the St. George Island Sizzler. Now we spend the entire summer trying to decide which races to do. Between trail races, road races, summer track, and what appears to be a triathlon within easy driving distance every weekend, the summer season has become as busy as the rest of the year. The number of runners on the roads and trail during the week also appears to have increased exponentially. Admittedly this is just my observation, but on Tuesday mornings I recall driving to Tuesday morning track and seeing maybe four other runners, and they were all on the track with me. Now I see a group of about 25 runners on Killarney Way, only to find another 30 runners at the track preparing for some of Gary and Bill’s torture. Of course I could just ignore all the races and runners and take a break myself, but what fun would that be?

Speaking of fun, I am at the midpoint of my first year as President of GWTC and I am really enjoying it. As I have repeatedly said, we have such a great core of members who continually step up and show their passion for running. This month Tsige Tadesse has graciously agreed to replace Felton Wright on the Grand Prix Committee. This of course will free up Felton to concentrate on marking the course for our next GWTC non-trail race on August 15 – Breakfast on the Track Mile. I am sure everyone will be able to find something to keep themselves occupied until then.

See you on the roads,
Tony