Many races are labors of love, but the Alan Sundberg 5K held in Maclay Gardens is a very special event for Bill Sundberg. In 1998, he lost his brother Alan to skin cancer. Alan was only 33 years old and Bill reacted to the painful loss with a promise to do something about the disease that took his brother’s life. He helped found the Florida Skin Cancer Foundation shortly thereafter and the Alan Sundberg Jr. 5K race, in part to keep alive the memory of his brother, but also to help keep alive others who might fall victim to this cancer. The race does two things – it raises money and it raises awareness. Each year a crew of professionals led by Dr. Armand Cognetta provides free examinations for skin cancer. More than one person has learned for the first time at this race that they needed medical attention for their skin.

Godby High School star, Joe Franklin, took time away from his fall cross country schedule to win this race in a time of 16:11. He beat a pretty good 800 meter runner, FAMU star Kevin Hicks, who earlier this year breezed through an 800 meter race in 1:47.28. That is the kind of talent it took to knock last year’s winner, Gary Droze, to top master and fifth overall. Droze ran the same time as his winning effort of a year ago – 17:11. On the women’s side, Seeley Lovett continued her hot streak and proved she does not have to swim or ride a bike to win a race by capturing the title in 19:11. Loranne Ausley tuned up for Ironman Florida by taking the masters title in 22:57.

We talk about a lot of races in this column. And with Turkey Trot not too far off into the future it is a good time to recognize that all of this fun and good works would not happen without an amazing core of volunteers. In Tallahassee, Volunteer starts with Bill Lott and then moves to Joe Dexter. Gulf Winds Track Club recognizes the importance of volunteers with an annual award. Bill Lott, who probably works the finish line at more than 52 races a year – yes he finds a way to work two in one weekend more times than I can count – probably deserved to win this honor every year. That kind of misses the point though, so someone came up with the perfect idea of just naming the award after him and so it became the Bill Lott Volunteer of the Year Award. Now you can’t have a quality race without certain equipment – like a clock, traffic vests, cones and more. Joe Dexter, in addition to working at races, is the keeper of the GWTC equipment that 99% of the races in town use. He checks it out and bac 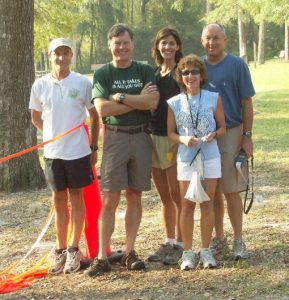 k in, keeps it in working condition and in many cases travels with it to make sure some rookie race director knows how to use it. Judy Alexander, another superstar, has been producing a series called Volunteer Spotlight. You can read about these unsung heroes at www.gulfwinds.org on the Volunteer page. This month she featured Mark Priddy who has done more than his share over the years. Mark summed it up the call for volunteers perfectly: Look at the race calendar. Call (or email) the Race Director and ask to be assigned. Yeah, it can be scary at first, but volunteering will become an addictive experience! You will serve with some wonderful people, and make new friends. I promise you that you will benefit and be blessed by the experience. Do it once and you WILL feel a sense of satisfaction from the experience!

See you at the races!