More than 300 athletes gathered in St. Mark outside Fort San Marcos de Apalachee on Saturday morning, 15 February 2014, to run either the Flash 12K or the concurrent 6K race. Stanley Linton and 2006 Flash 12K champion Vince Molosky quickly left the rest of the field behind, running side by side. After two kilometers, as the runners headed north on the St Marks Trail, Linton edged ahead, opening a gap. By four kilometers Linton had widened that gap to 100 meters. That lead grew to more than 600 meters by the time Linton returned to Fort San Marcos and the finish line, winning the 12K in 39:39. Molosky was runner-up in 41:48. Zach DeVeau took third in 43:16. Carl Nordhielm was the top master runner in the race, finishing fourth overall in 44:38. 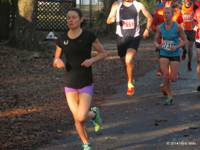 Four kilometers into race Seeley Gutierrez and Emily Ness were just a few steps apart, leading the women’s field. Ness fell back, though, leaving the race to Gutierrez, who went on to win the women’s race in 45:20. Katie Sherron, the top woman at the 2012 Flash 12K, was second in the women’s standings, 18th overall in 48:45. Mary Anne Grayson of Thomasville, Georgia, was the third woman finisher and the first woman master, 33rd overall in 52:13. After challenging for the lead in the first half of the race, Ness was the fourth woman in the 12K, 34th overall in 52:45.