Lord, Thanks for the Volunteers! (David)

Lord, thanks for those volunteers

So many races in Tallahassee, even the quirky ones, have 30-year histories. 2018 started off with one that is in only its fifth year. Nevertheless, l would not be surprised to see the event still well attended in another 30 years. The Swamp Trail Marathon, Half Marathon and 6.5-mile Races began in the frigid cold, that is electron cold for the race volunteers Saturday morning, January 6. 2018. I found one temperature recording of 21 degrees at race time (probably at the Tallahassee Airport) and my car recorded a temperature of 24 degrees, making the Swamp Trail races among the coldest ever run in Tallahassee.

The Swamp Trail races are run through the heart of Elinor Klapp-Phipps Park, which is managed by the city and the Northwest Florida Water Management District. The park includes 670 acres, with the shores of Lake Jackson providing one boundary. You can find huge oaks, ancient magnolias, poplar and streams and single-track trails.

A loop course that is approximately 6.55 miles long forms the base for all 3 races. The mathematically inclined reader will quickly recognize that 2 loops of the course is a half mile and 4 loops is a full marathon. The Swamp Trail is just one of many colorfully named trails in the park – Coon Bottom, The Creek Forest Tail and the Oak Hammock Trail are some additional ones. What makes this event unique, however, is that approximately 80% of the trails are single track trails with a multitude of root systems crossing the trails. And sometimes instead of crossing, the root system will make a turn and hurry down the trail. Most of these root syst 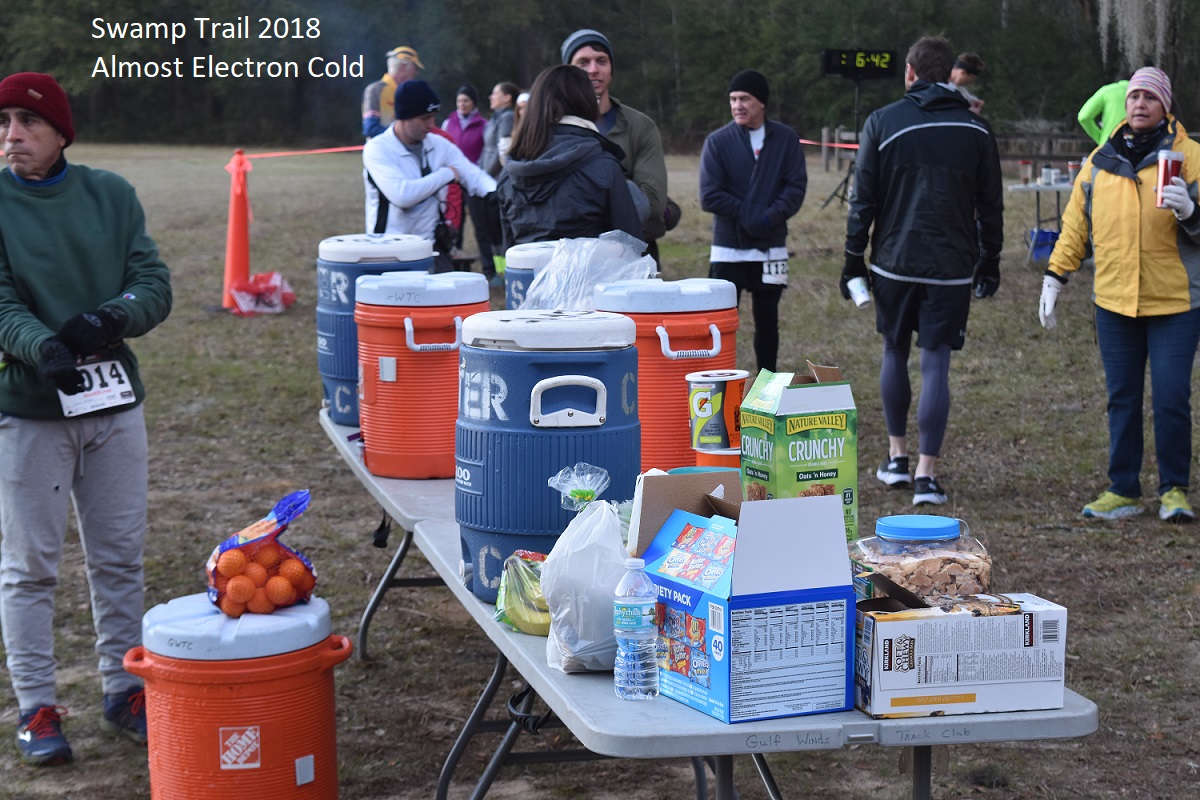 ems and other hazards are covered with a thick layer of decaying leaves.

The Creek Trail presents some unique problems as it winds its way along the creek for awhile and then crosses over the creek, usually on a 4 X 6-inch board that serves as the bridge over the creek. Much of the trail is hilly too – up and down, with very little flat.

It was pitch black as I left the comfort of Miller Landing Road and made my way through Gate B toward the start of the races on a dirt road. After a mile or so, I began seeing the flash lights of the volunteers parking cars. It was early and there were very few cars parked in the designated field. I approached a heavily bundled volunteer – who turned out to be Dave Anderson – and he gave me instructions on how and where to park. I looked at my dash board and saw 24 degrees. I thought to myself, “no matter how hard running the half marathon becomes, it will not require as much toughness as Mr. Anderson displayed.”
Over 170 people registered, but did I mention it was cold? I had registered for the half – 2 loops at a careful pace. No final numbers have been posted, but approximately 100-120 runners finished one of the 3 races being offered. Perhaps some got lost. As I was picking up my number a runner kept trying to communicate that the address he had for the start was miles away from where we were according to the GPS gods. There were quite good directions emailed to each runner, but we all tend to overlook such things when we have a computer to tell us where to go.

The sun finally made its appearance but it did not add much warmth. It did, however, allow participants to see better. A few minutes past 8, race directors Kristin and Jim Halley gave the command and sent the runners on their way. Did I mention how difficult it can be to pass runners on the narrow, tree rooted, rock infested, single track trail? The first hundred yards or so of the race were across open road, but it was a very short distance before runners turned left and found a tight, narrow trail. They fanned out in single file.

There is one rule that a trail runner should never forget. “Never spend time looking up at the runner ahead of you.” I don’t mean the runner right in front of you, but the one just in sight that you are trying to catch. While I had several close calls, I made it through my first 9 miles or so without a fall. I had been running alone for a while. It is not always easy to follow the trail, at least not for the color blind as the little flags used to mark the trail blend in with the greenery sometimes. I mention that only because it can be a distraction sometimes. In this case, I finally saw a runner ahead of me. I was feeling pretty good and had been catching a few people. Next thing you know, I was watching the runner ahead and trying to bear down and catch him, while trying not to miss any flags marking a turn. Suddenly, – Bam! I was flat on the trail, face first. I was lucky as it was one of those “only my pride hurts” falls. I got up and went after the runner, this time watching my feet a lot closer.

As the course nears the end, the trail seems to be wider and smoother, providing the runners with a chance to finish strong, Many, including me, do just that. Those good finishes have a way of bring runners back – regardless of what happened before.

I really can’t imagine what it took for the race volunteers, from the directors to the parking people, to brave the conditions and pull off such a great event. But thanks to them all for helping to get 2018 off to a better start than 2017!