This month’s “Spotlight” shines on Peg Griffin, an outstanding runner and volunteer who spends about as much time on club business as she would a full time job.  If you have ever wondered where the results of that last race you ran came from or how they got published on the website so quickly, you can usually trace them right back to Peg.  As you will see when you read the interview, she is as modest as she is generous with her time and praise! 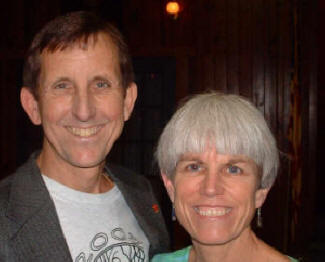 JA:  How long have you been a member of GWTC & what positions have you held in the club, including races directed/co-directed?

•           Served on the Board as an elected member in 1992 and 1993, and currently serve as an appointed member by virtue of my position as Membership Director

JA:  What is the most memorable volunteer job you’ve done for the club?

PG:  On the spur of the moment I helped with the Ten for Tim Relay in February 2001.  Over 400 people showed up at the Leon High School track to show their support for Tim Simpkins, a then long-standing member of our Club who was fighting for his life against cancer, a fight he would lose a month later.   The members of our club raised almost $17,000 for Tim and his family that day.  They dressed up in funky outfits, they came , and they gave — and in these ways they showed what a loving and generous community we have in Gulf Winds Track Club.  It was an honor to be part of that memorable experience.

JA:  What drives you to want to take on such time-consuming activities?

PG:  I ask this question of myself a lot.  For many years my Club activities consisted of running races and attending social events.  Then one day (I don’t remember how or why), I helped out at a race, and have naturally become more involved in Club races and operations ever since.  For the last few years, I have had a growing interest in technology – and found lots of opportunity to develop that interest within GWTC.  I have thoroughly enjoyed working with the scoring software system that we use, and integrating it with our membership database.  Lately, I have been helping out with the GWTC website, and that experience is serving to satisfy my craving to learn about technology and what makes a website work.  So, to answer the question, I look at it as a win/win situation – the Club wins by the product it receives; I win by gaining the knowledge and experience that I crave and the satisfaction of giving something back to the Club that has given so much to me; and, most importantly, our community wins by the gifts we are able to bestow on it as a result of having developed our Club into a viable group with a great set of priorities.

JA:  What would you tell someone else to encourage him/her to volunteer?

•           Give a little or give a lot – whatever your heart and schedule can handle.  Anything and everything is appreciated by your fellow members.