Playing in the Mud

I started a journey where precise distance was unknown, whose rules I poorly understood and whose obstacles I did not fathom. Along the way I found great fun, camaraderie and a challenge. But most of all I found good fun.

Before I tell this story, you should know something about me. My most notorious act as a runner occurred right after I hit a root on the Overstreet Trail and began an ugly fall toward a banged and scarred up body caused by a collision with the ground. But as my running companions noted with astonishment, by the time my momentum had come to a stop on the dirt trail, I had punched my watch to make sure it was not recording time when I was not running. You could also ask Gary Droze about my efforts to capture splits while running 200’s. I am into precision.

So my first question when 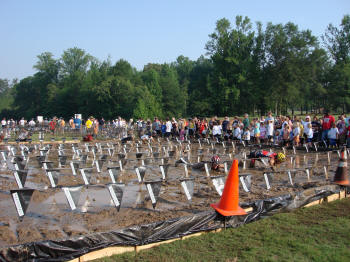 Travis Miller talked me into a quick trip to Atlanta to compete in this year’s Muddy Buddy was “What distance is it?” While our goal was to stay low key and have fun, that didn’t mean I didn’t want to know distance. How else can you get meaningful splits? Two people compete as a team. One person starts on a mountain bike and rides the 1996 Olympic mountain bike course (or part of it) toward the first of five obstacles. At the obstacle the biker drops the bike, scurries over the obstacle and then takes off running. Two minutes after the biker starts, the second person starts running to the same obstacle, does his own scramble, finds the bike among a few dozen other bikes, and rides to obstacle number two where he delivers the bike to his waiting teammate. The leap frog continues until one has run three legs and biked two and the other has biked three legs and run two. The last obstacle, the “Pit,” is filled with mud and rocks and teammates must conquer it together before crossing the finish line.

So back to splits. My first clue that this was not going to be your normal “Mr. Exacto” measured course was the web page description noting the event would be somewhere between 6 and 7 miles. Even after finishing the event, I really can’t say which number was closer to right or even if the course fell within that range. Fearing the mud pit would ruin my watch, I decided to leave it in my bag. To make the experience complete, the race organizers lost our times, so the best I can do is estimate our finish time – something close to 41 minutes.

The distances between obstacles were not marked, so as I blasted off on the first and longest leg I really wasn’t sure whether I was running three quarters of a mile or a mile and a half. I started at the back of my wave (there were 800 teams competing in 11 waves) and watched the mass of runners in front of me bolt ahead and up the hill. I started reeling them in, but it didn’t take long for the uncertainty of pace, distance and terrain to cause my heart to start beating a bit too fast and next thing I knew I was hyperventilating. It was probably just the fact I was missing my watch. Eventually, I crested the first hill and started to relax as I eased down the other side at a quick pace and began passing many more runners.

Travis was long gone by the time I reached the first obstacle. Good thing, because he might have asked for a new teammate if he had been watching. I had not been able to make up my mind whether to wear a shirt for the event. Most experienced people I asked said it was a good idea to protect skin through the mud pit and on the obstacles. But it was warm and sticky and I had a cotton shirt. So I decided to run carrying the shirt for the first leg and would put it on if and when I needed it. As I approached the first obstacle it hit me that I could not carry my shirt while riding the bike. So I tried to put it on. What I forgot was that I had my bike helmet on (all participants had to keep their helmet on at all times). As I tried to pull the shirt over my head it got caught up on the plastic sun visor that formed part of my helmet and the next thing I knew I heard something cracking. I panicked and froze with the shirt half wrapped around my head while the volunteers broke into a laughing fit. I ripped the shirt off and tossed it into the woods and climbed on the beams that formed the first obstacle. The visor kept falling over the front of the helmet and blinding me, but I managed to cross the beams and find the bike. I jumped on and took off ripping the visor off the helmet as I started down the trail.

Somehow, I thought the bike would be the easy part. After all, we all bike much faster than we can run; so all I would need to do is bike faster than my partner ran. I sure had that wrong. I took off expecting to leap frog Travis quickly and then settle into a nice recovery pace. But Travis was nowhere in sight. It didn’t take long before I was descending a steep trail toward a rocky creek. At the mandatory pre-race meeting, the director held up an arrow that pointed straight down. “If you see this,” he said, “it means hazard. Be careful.” Then he held up two downward pointing arrows and said, “If you see this be real careful and slow down. This is a bad hazard.” Finally, he held up three downward pointing arrows and said, “When you see this, unless you really know what you are doing, think about getting off the bike and walking it.” So what do I see at the bottom of the hill – three downward pointing arrows. I started hitting the breaks to slow as much as possible, but my bike skills are not good and I had visions of a headlong flight into the rocky creek bed and a broken collar bone. My teammate, I know, would prefer I arrive a little later than not at all. So I hopped off the bike, plowed across the creek and started up the hill on the other side where I jumped back on the bike.

Soon I arrived at the second stop where Travis was waiting patiently (again). I handed him the bike and he was off. I navigated the monkey bar obstacle and took off running. And so it went as we swapped back and forth at each obstacle. At the last obstacle, I handed off the bike and climbed a rope wall. Powering up the rope wall was one of my biggest rushes of the entire event. At the top I looked down a long slide and thought – well if everyone else is doing this, it must not be so bad. Down I went and off to the finish. The last section included the biggest hills – I remember running past bikers pushing their wheels up the hillside and even some who stubbornly continued to ride. I thought about my teammate Travis and wondered how he had handled this hill.

Just outside the mud pit, Travis was waiting again. The mud pit is something you just wouldn’t do when in your right mind. But competition, even if for fun, does something to you even if you don’t know your splits. And in seconds we 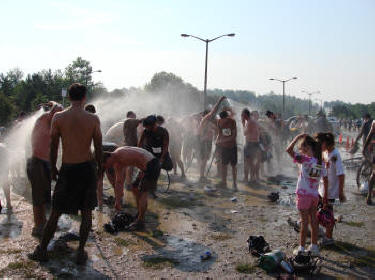 slid under the netting and into the 75-100 foot long muck field. It was clearly the marquee event and the place the crowd gathered. The announcer berated those in white (“White ain’t right at the Muddy Buddy”) and those who weren’t ready to get muddy. As we crawled through the mud, the rocks and gravel chewed up our knees. The rules require you to go under the flags that crossed the pit making sure you stay low and get plenty of mud on every part of your body. But it doesn’t stop anyone as all the participants find a way to get through the pit. And most of them, including me, found a way to come out the other side with a great big smile – even if we didn’t know our final time or splits!