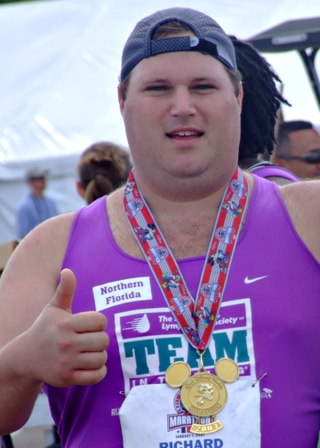 After that, though, he had his sights set higher: he was going to complete Goofy’s Race-and-a-Half Challenge in 2009. All 200-plus pounds of him.

But he never got the chance. Just one week after completing the 2008 Walt Disney World Marathon, Richard was gone. A car accident near his Tallahassee home in the early hours of January 20 took our friend away from us, and put his dreams to a sudden end. He was just 28 years old.

So since he is no longer here to do it himself, we – his friends – are running the 2009 Walt Disney World Marathon for him. Some of us will run the marathon, some the half-marathon; most will run Goofy’s Race-and-a-Half Challenge. But all of us – nearly 40 total – will be out there for Richard. Complete with matching shirts, our own pasta party and countless group training runs, we’re running a race he can be proud of.

The Disney Marathon changed Richard’s life, and his own words show how much the experience meant to him:

The Disney Marathon was by far the hardest physical thing I have ever done in my life. But it was an awesome experience I will never forget. And the finish line was huge! People were going crazy. They were yelling, the clock was ticking and the cameras were flashing. When I crossed the finish line, the butterflies came. I realized that I had accomplished my goal: I got a Mickey Medal.

Richard was more than that big guy out on the running trail or at the end of the table – beer in one hand, chicken wing in the other – at our post-run dinners. He was our heart. We are a close band of runners, each with our own role. We’ve got our coach, our social director, our storyteller and our team mom. But we have lost that one person who made us more than just individuals who share a hobby – that person who made us a family.

Some people dive into life; Richard did a cannonball. He seized every opportunity to make his life – and the lives of those around him – richer. He ran marathons despite all apparent physical limitations. He crocheted blankets for new babies. He took 30-mile bike rides, if only to spend time with friends and enjoy the food stops. He had just learned to play golf and looked forward to his first game the day before his accident, even though it would be in the freezing rain. He was a certified scuba instructor, and struck quite a figure in a wetsuit.

But Richard loved his friends and family most of all. And he loved to see people succeed. He shared his love of running with everyone and inspired others to follow his example.

As a team leader with the Leukemia and Lymphoma Society’s Team in Training, Richard helped new runners gain the confidence they needed to train for their first marathons. After all – if he could do it, why couldn’t they?

He ran the 2007 Tallahassee Turkey Trot 15K with one of his team’s least-experienced runners. He kept her going, staying with her the whole time. When they finally reached the end, they were the last finishers. She was embarrassed to finish last, so Richard stepped back and let her cross the line ahead of him.

Richard was our cheerleader. When he found two team members struggling to finish a 20-mile run on Old Centerville Road, he slowed his truck to a crawl and drove next to them, blasting Kenny Loggins’ Danger Zone. He stayed with them their last three miles, pushing them to keep up. Loud, motivating, thumping – and all Richard.

He never gave up on anyone, especially himself. Running the Marine Corps Marathon in October and then running his next marathon in January, he had some difficult training runs. A schedule like that would take its toll on someone half his weight and in far better shape. But Richard was committed. His 20-mile run was the hardest part. He went by himself to Southwood’s Central Park and Lake to run the two-mile loop. He planned to do it 10 times. Around and around, all alone. When it started getting dark, he was still out there.

We’ll never understand why a person so much larger than life, who always put others first, was taken so soon.

That’s why we are training for the 2009 Walt Disney World Marathon Weekend. But this time, our purpose is so much larger than ourselves. We do not run to lose weight, or to get a medal, or to say that we did. We run to honor and celebrate a teammate. An athlete. A friend.

We miss you and we love you, Richard. This one’s for you.