A View from the Top
Running the Big River

The beauty of Torreya State Park is unmistakable and literally unmatched on this earth. It has deep, dark swampy ravines, alligators and wild pigs and bears, and while I have never seen them, the locals here tell of the the wailing midnight screams of the secretive Florida panther. Small rivers and streams drain dark brown stained tannic acid waters, through dreamy lowland swamps of fallen trees and around the buttresses of huge bald cypress, some hundreds of years old, ultimately, into the great Apalachicola River, wending its way 100 more miles to the Gulf of Mexico and the tiny fishing village of Apalachicola, where the river supports, or used to support, highly successful oyster and shrimp fisheries.

p limestone ridges This, in fact, is the southern most uplift andright tiniest foothills of the Great Smoky Mountains, and there is a special place here, among many special places and on the running trails including this 25K and 50K, named Logan’s Hill. If one climbs Logan’s Hill and looks back as far as one can see to the north, the geologic folds of the surface of the earth are apparent and go on further and further than you might think possible. Fields of wildflowers dot the runnig trails too. Yesterday it was the red and yellow Indian Pink and the bright red bloom of the Florida Anise.

There are two trees mentioned in the Bible, the Yew tree and the Torreya tree, both found in the Garden Of Eden. They are found nowhere else on earth as far as I know, except in Torreya. This drove the now deceased Mr. E. E, Calloway of nearby Bristol, Florida, to proclaim that Torreya State Park is actually the site of the biblical Garden of Eden. While I am not necessarily an adherent to bibles and biblical teachings per se, the beauty of the place is enough to make me a believer even if just temporarily. And beneath it all, the omnipresent big river is the soul and heartbeat of this place and of the entire region.

This is a hard race. Not just by Florida standards, but by any standards, anywhere. There are two loops connected by a steep connector trail for the 25K, and run it twice for the 50K. Not to mention the 10 minute long final uphill to the finish. But the single track trail is rooty from start to finish. The steep climbs and drops are continual and relentless, but you must keep your mind and your eyes on the trail every second of every minute of every hour, or else a nasty fall will follow. The stump jumping is also continual, very little gradual descent or climb. I took only one fall but it was a whopper. Probably the grand prize winner in this year’s America’s Funniest Home Videos but no one was there to film it. I was spitting sand out of my mouth for a mile and pulling live oak leaves out of one ear, and then found a big stink bug that tried to burrow into my scalp. I left him there on the trail.

As for the race, it begins at sun up, a run across a level campground, then down and up a steep hill as the runners start to sort themselves out before running a root infested downhill to the first of the two main single track loops. The first downhill was uneventful but for one fellow next to me who caught a root and all I saw was a body flying horizontally through the air. He got up no worse for wear and we continued on. Reaching the single track Gregory House Loop is not cause for celebration. The first few miles are not terribly easy to run. Steep up and down and jump some roots and streams, and watch where you put your feet and most chatter stops right then and there. Then some more serious climbing past Civil War Confederate gun emplacements which overlook the Big River. You cannot see the river though, in the intervening 150 years as great oaks, hickory and sycamore trees have grown up to enormous heights. The gun emplacements and gnarly climb signals that you are soon to reach the first aid station at the Gregory House. People are already walking and hiking.

I never stop there, being self contained and this is less than 3 miles into the race, but the view of the Big River from the Gregory House is always beautiful. This morning it is downright astounding. The river is maybe 100′ below us and in the distance. The Big River runs muddy in the spring, but above the river is a solid fog bank of swirling clouds. Then above that the green forest is the backdrop, and above that, another swirling fog bank. This most assuredly must be the Garden Of Eden!

I continue down into the the thick forest. The trail winds this way and that. You cannot see too far ahead. You must watch where you put your feet. I am passing a few runners here and there and not being passed in return. I listen as the sounds of their running and sometimes their chatter recedes in the distance. It gives me a silly feeling of satisfaction. Every now and then I see a brightly colored shirt through the forest, ahead of me. I hadn’t planned to run one hard step until passing Logan’s Hill at about mile 4, but it seems important to catch people and I continue to do so. I guess we never learn.

Then a crashing and cursing behind me, and here comes my buddy Dana Stetson. Dana and I have run untold miles together and what could be better than running with a friend in a beautiful place? Dana slows his pace and we run together, telling bad jokes and worse. Another mile or two and a sweet young thing passes us. Dana gives me a wink and off he goes, seeking better company. Oh, well..

I pass Logan’s Hill and pass up the urge to sit down on the bench that some sadist placed there and enjoy the view to the north. After Logan’s Hill the trail is more upland and runnable for a few miles and now is the time to make hay while the sun is still shining. You are pretty much on your own now because runners are so spread out. Some of the younger and more impetuous runners are now walking and kindly give way as you call out to pass. Then past the 5.5 mile aid station where I grab a drink, some Shot Bloks, thank everyone for being there, and plunge into a deep forest again.

I am thinking about how good I feel and about the very steep connector I will reach in a few more miles. That takes my mind off the trail and my Olympic worthy trip, tumble, roll ensues. Well, OK, nothing broken I guess, but a mouthful of sand and live oak leaves in my right ear which require removal. One won’t come out easily and a jet spray of Gatorade from my handheld does the trick. There is a young couple ahead of me and I am trying to stay with them to pass the time and another mile or so until we reach the steep connector.

After my year of living and running in the Blue Ridge I have made it a point to run the Connector and not walk it. Not quite, but I probably did run 90% of it. I am rewarded by passing 5-6 more runners until I reach the Challenge Loop. I guess I am about 7.5 miles into this 15.5 mile race, but maybe that was a bad idea as the first and definitely not the last few stirrings of pain and tightness in my calves occur. Balanced off not too nicely by the heaviness in my quads.

Well, it is a race, not a run and the Challenge Loop is actually fairly runnable, so you might as well roll the dice and go. I am all in. A fateful and eventually not all together successful decision. Dana comes and goes up on the Challenge Loop. He runs ahead and waits for me. Then he falls behind, he passes then stops to eat and drink or pull some salt tabs out of his pack. I am leap frogging with him and another couple who eventually drop me like a sack of potatoes. Dana knows me well enough and starts to mess with my head. He is successful. “Hey, man, are you OK?” and “Hey, do you need something?”, and off he goes in pursuit of the youngsters running ahead. Ultimately I got the last laugh because he was running the 50K, and after a 3:30 or so first lap, the second one took him about 6 hours. I guess he slowed down with no one else to abuse.

The Challenge Loop usually feels short and quick. Today it goes on endlessly. Where is that Connector? I am running down like a dying battery. Inch worms are passing me. My legs are lead, it is mile 13 now and I have had to wiz since mile 2 but if I stop, well, I probably will not restart in this lifetime. Man, the things your mind does to you, alone in the forest. When you have shot your wad. I have shot my wad.

The Connector trail is worse downhill than up, but eventually comes to an end and drops me at the final aid station. Race director and sadist Joe Edgecombe is there, cheering on the dying runners. I say “About 2 miles more, right”, as I am slamming salted boiled potatoes. Joe is a renowned liar about such things and I know it, but he says “Nah, less than 1.5 miles.” I don’t know why a lousy 1/2 mile sounds like a big deal but it sounds good to me in my non-existent state of mind. I even look at my Garmin and it tells me I have 2.3 miles to go, but I think that Joe must have it right. I am now in La La Land.

Usually there is lasagna at the finish among other food, and lasagna is uppermost in my mind now. Lasagna with meat sauce, heated in the microwave…yeah, that’s waiting for me at the finish! Yeah!

I start out of the aid station going the wrong way. Aid station workers scream in unison “NO!!!”, and I turn around. Joe says to take a hard right up there somewhere and off I go. Fortunately there is a big red arrow and I turn right and start up a nasty hill. Running, then walking, I must have stumbled 10 more times until the final big hill climb with one mile to go. “Lasagna, lasagna,” that’s my mantra now.

I run the final mile hill to the finish line. Not fast, but I ran it. It was a matter of principle. And a matter of lasagna. With meat sauce.

Joe Edgecombe and Marty Kirkland are phenomenal race directors and I thank them. Aid station workers and fellow runners are supportive to a fault.

Torreya State Park is a place of incomparable beauty and spirit.

“Eventually, all things merge into one, and a river runs through it. The river was cut by the world’s great flood and runs over rocks from the basement of time. On some of the rocks are timeless raindrops.” (A River Runs Through It, Norman Maclean).

A course diagram, you get the picture: 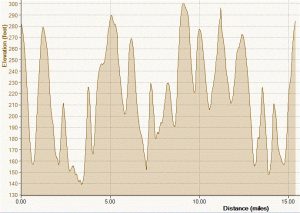