I love running through neighborhoods! I have a four mile course that I often run from home on weekday mornings that is tried and true. I enjoy seeing sleepy neighbors walking their dogs, getting their newspapers and best yet…retrieving their recycling containers from the curb. 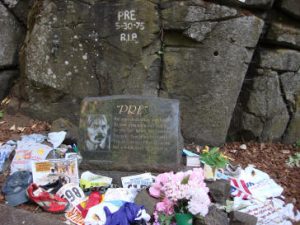 I also love checking out neighborhoods in other cities where I run. Earlier this summer, we were fortunate enough to be in Eugene, Oregon to watch the Olympic track & field trials. What a perfect location to host such an event. Having read Kenny Moore’s book “Bowerman and the Men of Oregon” (see Sheryl Rosen’s review in the February 2007 Fleet Foot), I felt appropriately briefed on the historical running-related importance of Hayward Field, Coach Bill Bowerman and the University of Oregon. But nothing could have prepared me for the amount of love Eugene has for running in general and for Steve Prefontaine in particular. There are trails galore throughout and around the city and a very popular running area labeled “Pre’s Trail” complete with nicely mulched covered trails.

Another special place that drew attention in Eugene was the memorial on Skyline Drive that marked Pre’s car crash and ultimate death back in 1975. Over the years, many a caring soul has come to lay a remembrance at the base of the marble stone that marks the dreaded spot. Magically, nobody touches the race numbers, medals, notes, etc. that people leave there for all sorts of personal and touching reasons. It’s almost as though a healing process occurs just by making the pilgrimage. For me, the overwhelming thought I had was one of deep appreciation that I too live in a city that gets it. I’m proud to know that Gulf Winds has hosted an off-road race for the past 32 years that honors this charismatic and memorable running legend, Steve Prefontaine.

This year’s Prefontaine Forest Run will be held on September 27 at the Silver Lake Recreation Area. Race director, Jeff Nielsen, has been with this race for the past eight years. It takes something pretty special to direct this race. You have to have just the right touch of mischief and dedication to deliver an event that will satisfy the hard core runners that come out on race day. The founding father, and king of daring and different starts, is the one and only Dave Rogers who has posted an interesting history of the race on the club’s web site. As you read through this fascinating overview, it’s easy to see how this race has always been a tad bit different and much to the liking of those who enjoy a little spice in their off-road races. Jeff Nielsen will tell you how he and Jeff Doherty, his predecessor who directed the race for 7 years, used to spend quality time in the forest looking for tree limbs and branches to drag across the path of the runners.

More recently, Jeff has gone a little easier on the course enhancements as he collaborated with Gary Droze to include a race for high school cross country teams in search of a different type venue. To me, the highlight of those years was the push-up contest that Gary staged after the race. You wouldn’t believe how many push-ups those kids can do! This year, kids and adults will run again but it remains to be seen whether the tree limbs, branches and other course enhancements will appear or not. There’s one sure way to find out though and that is to come on out and run! After all, this year’s Prefontaine Forest Run is a Grand Prix race. Who knows, maybe Jeff can work a deal with the Grand Prix Committee to have push-up competitors earn grand prix points! Wouldn’t that be great? See you there! Start practicing now!