Tom Perkins and Mike Sims peered out from under a tent that offered only limited protection from the driving wind and rain and watched the tree tops bend far past what seemed the point where they might break. To send runners scrambling under such swaying giants would have been sheer madness. Maybe the fact they were even out there considering it, showed a temporary loss of sanity. And so the rain soaked co-race directors made the only decision they could – cancel the race. Well, actually it wasn’t the only decision as the following Saturday, August 30, offered a chance to do a “make up” and that is just what they did, despite all the extra work it involved. 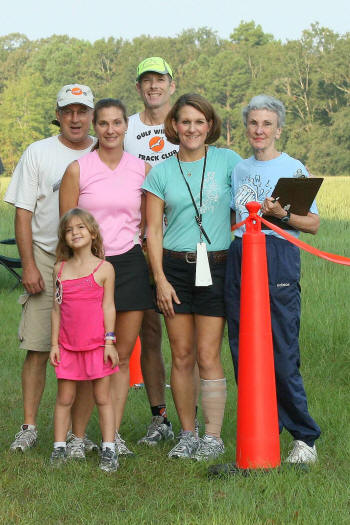 Despite the Labor Day weekend, the second chance at Madness was a success. A slow start to registration had Tom Perkins wondering if the decision was a good one, but it didn’t take long before the crowds began pouring in as the high school teams showed up for the 5K, the general public for the 8K and the middle schools for the 3K. When it was all said and done, 262 finishers made their way across the finish lines.

This race was held at the Miccosukee Greenway from 2004 until 2007. 2008 was its debut at Eleanor-Phipps Park after the county park officials raised objections to holding the race on the Greenway. While there was a lot of discussion about the appropriateness of holding race events on the Greenway, Tom and Mike when looking for another forum and found a very cooperative Chuck Goodheart ready to host the event. The registration was set up under a group of beautiful old oaks and a course was mapped out. There was plenty of parking and a loop course was designed that was pretty and reasonably fast. The 5K runners took two loops around the course before finishing, while the 8K participants did three loops then finished with a curve through a field. The three loops received mixed reviews, but gave the 8K runners the chance to get to know the course.

Complete results on the way.