We often hear people who move away from Tallahassee say how they are unable to find a running group like Gulf Winds Track Club. And there are many people still here in Tallahassee who recognize what a special group we have. The reasons for such feelings are many, but I seriously doubt it would be so without the influence of Rex Cleveland. New York born and Chicago raised, Rex was always a unique individual free at a young age to wander and explore. Fortunately, that freedom brought him through Tallahassee. Rex told me once: 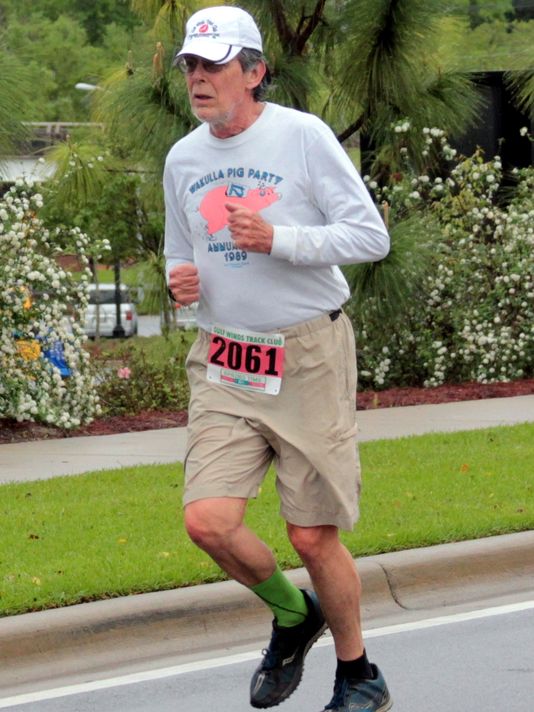 I visited Tallahassee in 1961 on a round trip motorcycle trip from Chicago to Key West. When Mae and I lived in Atlanta in 1967 we visited Tallahassee together and we both thought it might be a nice place to go to school. So that’s what we had in mind when we arrived here in August, 1970. It’s not as easy to explain why we’re still here, but I know that taking up running in 1977 and getting involved with the Gulf Winds Track Club has had a lot to do with it. Friendships and associations that develop over half a lifetime are difficult to leave behind.

On that trip in 1961 I camped at Silver Lake, which was then a private campground. I remember thinking that if I had more time it would be nice to go swimming. I would never have guessed that over 40 years later I would have run out there so many times — in the Prefontaine 5k — and still not gone in swimming.” (From May 2003 interview)

Rex not only decided to stay, but he managed, with considerable help from his wife Mae, to take 16 or so 8 ½ by 11 inch pieces of paper folded in half and bound together and create the catalyst for a group of people to bond together by competing, exercising and socializing together. The resulting 5½ by 8½ booklet, The Fleet Foot, became the guidewire for connecting the Tallahassee running community. Perhaps it was the odd shape of the newsletter that appealed to the odd group known as runners. More likely it was Rex’s gifted writing and communication skills.

Communication was so different in those days – without email even, let alone the avalanche of instantaneous dings, beeps and buzzes that bring messages and pictures to our devices. The 5½ by 8½ Fleet Foot ruled. Rex created standards for excellence and consistency and introduced great pictures to the publication. He had an amazing way as the editor of the Fleet Foot to encourage contributors and to get the best out of them. I saw (and experienced) it many times during my time as club president. A carefully designed question about a sentence would cause me to scratch my head in puzzlement and make a change for the better as the light Rex was shining finally entered the room.

Perhaps most importantly, he set the ground rule that every club member mattered. The fast and the slow should all be made to feel welcome and part of the running group and the newsletter. His message was just be a part of the family and something good will happen. Rex also had this sort of twinkle in his eye that said “everything is going to be alright, even if you don’t fully understand yet.” It invited you to “think again” and not be afraid to find what you might have missed first time. It exemplified a quiet confidence he had in knowing he was right about something, but wanting to guide you to your own self-discovery rather than make you look or feel bad for being wrong. I don’t mean to mislead; Rex wanted things done right and somehow made sure they were most often. But if you weren’t watching carefully you might never realize he had taken a mess and turned it into something we all could learn from.

Rex, the man who rolled through Tallahassee on a motorcycle his first time, is a member of the GWTC Hall of Fame and the Caldwell Advancement of the Sport Award and editor of the club’s newsletter for approximately 17 years (1983-2000). Shortly after he retired as editor of the newsletter, the name of the award became the Cleveland – Caldwell Advancement of the Sport Award.

Rex, my friend, I damn sure miss you already. I didn’t get 50 years with you like Mae did, but I got plenty of time to know the world is a better place for the time you spent passing through. Thanks for all you have meant to us! Mae, you have been amazing though all of this. I know somewhere Rex is making sure your tab is right; and if he needs any help, I know an army that will be there in a few short minutes.