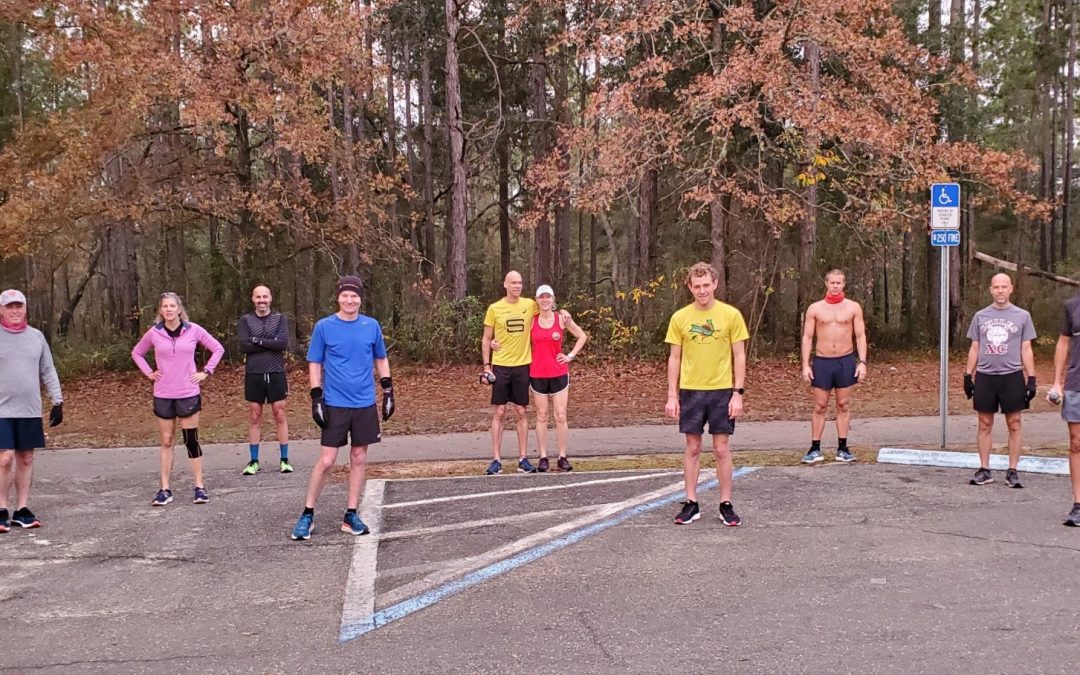 Don’t ask me how it could be, but Christmas has come and gone yet again and so too has the “Run to Posey’s.”

If you know your St. Mark’s hurricane history, you know that Posey’s came to a sad demise some years ago when Hurricane Dennis pushed the Gulf waters into the town of St. Marks. Posey’s never recovered from the flood waters. Nevertheless, the name perseveres and the “Run to Posey’s” has become as much a state of mind as a run to a real place.

For many (myself included), the Run to Posey’s is a favorite. This year’s challenge was COVID-19 instead of hurricane damage.

Like so many other running events, it is rooted in tradition, family and friends. Part of its draw is that the run roughly follows the path of the old Tallahassee- St. Marks Railroad line and the paved trail is known now as the Tallahassee-St. Marks Historic Railroad State Trail.

Many runners usually start at the trail head located near the intersection of Capital Circle and Woodville Highway at 7:30 a.m. Christmas Eve

morning and run approximately 15.6 miles to St. Marks and, until 2005, Posey’s. Others jump in anywhere along the way they want and run, walk or bike however many miles they want.

The main goal: to finish in St. Marks and enjoy food and drink with friends and family. For many years, the crumbling building that was the home of Posey’s Oyster Bar was the post run gathering place.

Tony Kronenburg, usually credited with creating the run, gives the following account of the “first” Run to Posey’s on Christmas Eve morning in 1980.

“As Christmas approached with no family to visit and no one to spend the holiday with, I decided to run to St. Marks via the rail line to St. Marks on Christmas Eve morning. As a longtime railroad fan, I recognized that yet another rail line was headed for extinction. I also enjoyed the countryside and wanted to do something that would be memorable for Christmas. I enlisted Joe Blessing to join me, and Joe in turn invited two younger guys who were FSU physics majors.

The group parked at the corner of the Truck Route and Woodville Highway, and found it easier to run on the shoulder of the highway until just north of Woodville. From there, they turned off onto a dirt road that closely paralleled the railroad tracks. After running to the south side of Woodville they ran on the tracks until reaching Highway 98.

At that point they crossed back over to the highway (maybe to avoid the gun powder plant) and ran the remaining distance to the fort at St. Marks. Of course, they topped off the run with a visit to Posey’s for oysters, smoked mullet, and beer before Joy Opheim picked them all up in small VW.

My first Run to Posey’s was in 1984 and I noted in my diary that there were “around 26 people” running the distance from the trail head. Running to Posey’s that year meant running along an abandoned railway bed, sometimes on nearby pavement, sometimes on adjacent dirt road and sometimes through thick sand or mud where railroad tracks once lay.

Joe Beckham reports that the old railroad tracks came up in 1983 and the trail was paved in 1987. The gleam in Joe’s eye of a real trail became a reality after a lot of hard work by Joe and others in the St. Marks Rails to Trails Association.

This year’s run faced the most challenging obstacle in its history as participants had to avoid the coronavirus.

Saturday night parties that had a good chance of someone starting a fight. Dollar bills donated by customers covered the ceilings and were making their way down the walls.

The back deck hung out over the St. Marks River just before it joined with the Wakulla River and then pushed its way through the Apalachee Bay and out into the Gulf of Mexico.

In 2005, Hurricane Dennis made its way through the Gulf of Mexico toward the Florida Panhandle.

Fortunately, it chose a spot west of us (Santa Rosa Island), but before doing so, the category 4 storm took a deep breath and blew hard at Florida’s armpit. A wave of water rolled toward St. Marks with nowhere to go but the shoreline. Before it stopped the city of St. Marks was underwater and Posey’s was damaged so badly it did not survive.

This year’s run faced the most challenging obstacle in its history as participants had to avoid the coronavirus. Unfortunately, I was not one of them as a positive

test caused me to miss my first Posey’s Run in a very long time.

But there were others more than ready and able to keep the tradition going. It was a small crowd and the rules of social distancing kept people apart. Nevertheless, the Run to Posey’s lives, even if friends and family kept their distance from each other.

Thank goodness 2020 is almost behind us. Here are the strongest wishes for 2021 to be the best Posey’s ever.