Sometimes a marathon is not far enough 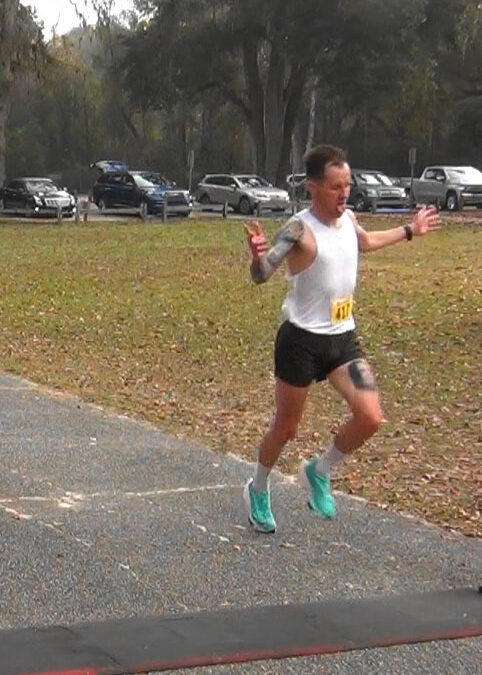 Some people just cannot get enough

The races are just a few weeks apart but could not be more different. On Thanksgiving Day, thousands run at least one of the races offered: one- mile, 5K, 10k, and 15 K. Families and friends are everywhere, and everyone is smiling.

On Saturday, December 10, 2022, 44 runners made the loop around Wakulla Springs State Park and Highway 61, while competing in a marathon (26.2 miles), 50K (31 miles) or a 50 mile race. All are part of the Tallahassee Ultra Distance Classic (“Ultra”). There  were no big crowds, but there was a lot of tender loving care given the runners as the outstanding group of volunteers did their best to get the runners through.

And there were some outstanding performances.

The best performance of the day belonged to Kyle Masterson. Masterson, from Alamosa, Colorado, ran the 50K in a time of 2:57:48, the fourth fastest 50K ever run in the Tallahassee Ultra. He needed to break 3 hours to qualify for the US 50K Championships. His marathon personal best of 2:17:49 to qualify for the Olympic Trials was a good indication that he could do it. Masterson averaged 5:44 minutes per mile to win the Ultra 50K.

It should be noted that while the time may have seemed fast  to me (and others watching), it was in fact the slowest 50K that Masterson has ever run. His best time of 2: 44: 38 is faster than the time recognized as the Wakulla Springs 50K record set by Barney Klecker in 1982. Perhaps Masterson will return to Wakulla Springs in the near future and best Klecker’ s long standing record time of 2:51: 53.

Masterson was still rebuilding his fitness after a lack of training around the birth of his daughter and reported he was just happy to break three hours and qualify for the national 50K team again. In 2019, he finished 7th in the 50K  World Championships.

Masterson was also quick to give the setting for the race course high marks. “I love the course and setting of the race – the foggy morning was absolutely serene with the early morning light, fog, and canopy of dead trees. I was enjoying myself the first two laps. It was really a fun race to be part of. That’s actually the slowest 50K I’ve run, but in some ways, it was the most rewarding after the past six months.

There were only six individuals taking on the 50 mile run. You might wonder why if you think about finishing a marathon and only being just over halfway to the 50-mile finish. Harold Arnold claimed the top spot in the time of 7:25:41, an excellent time. He was followed by Andy Nicol, who ran for 7:34:21. Holly Rice was the top woman, and she finished in the time of 8:43:63. The top woman in the 50K was Jenny Early who finished in 4:31:11.

Congratulations to Jack and Laura McDermott who stepped into the position of race director for the 2022 year.  The Tallahassee Ultra was first run in 1980 and has had some of the  best race directors from GWTC.  But the event has struggled some years – as shown by this year’s turnout.  Strong race directors are needed to keep races going strong these days.  I am confident that Laura and Jack are up to the task.  The good job they did this year will spread and I think the numbers will return to around 100 finishers.  They know how to run the marathon distance for sure. Laura has a most impressive 63 marathons completed while Jack has an unbelievable 249 marathons finished.

Special thanks to Wakulla Springs State Park for opening up the park again for the Ultra and sharing the beautiful place.