The 2022 GWTC Female Runner of the Year – Katie Sherron (MJY)

In naming its Runners of the Year, Gulf Winds Track Club seeks to honor those who, besides achieving outstanding times in the past year at various distances in local, regional, and national events, have served as models in their competitive spirit, their continuing devotion to the sport, and their support and encouragement of their fellow runners, both individually and as members of Gulf Winds. 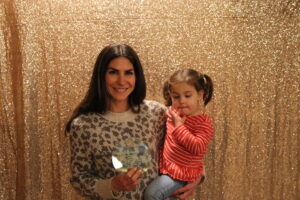 As we look back over 2022, another runner emerges as worthy of this title for a second time. Katie (Showman) Sherron was originally awarded this title in 2012. Since that time, she has married, had two beautiful children, and set the Tallahassee and GWTC running world ablaze competing for the first time as a masters runner.
Katie turned 40 in October of 2021 and celebrated by going out and winning the USATF Club Cross Country Championship Women’s Master’s 6K (in a time of 22:08) at Apalachee Regional Park on December 11, 2021. We know this award is not based on what happened in 2021 so let’s review Katie’s racing successes in 2022.
Looking at the Results page on the GWTC website, it can easily be said that if Katie showed up to run a race, Katie won the race. Her overall finishes are equally impressive and in one case (Sickle Cell 5K) she beat everybody, no matter their gender.

Here’s a look at what races Katie won in Tallahassee during 2022 and where she placed in the overall field. It’s hard to know whether she inspired her male competitors or left them demoralized as there was no catching her most of the time:

Katie’s enthusiasm for running and racing is contagious and there is no doubt that she inspires many a female runner to strive for their best performance. Some of Katie’s 2022 times were comparable and perhaps even better than what she ran in her collegiate days. She is truly deserving of the honor of GWTC Runner of the Year for 2022!

This award is not just for the fastest, but for those who have served as models for all of us by their competitive spirit, their continuing devotion to the sport, and their support and encouragement of their fellow runners, both individually and as members of Gulf Winds.