The 2022 GWTC Male Runner of the Year – John Baughman

Please allow me to explain how our Male Runner of the Year has met the definition of the award description. How has he competed in both national and local events?  First of all, let me start by saying he is a lunatic when it comes to running, and I mean that in the best possible way because he sets very lofty goals and very high expectations and meets them. He does things that a lot of people don’t aspire to do. Like completing the GWTC Extreme Competition. 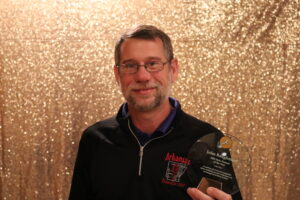 For example, he’s completed seven 100-mile races, including the Arkansas Traveler twice, he’s run both Tunnel Hill and Potawatomi races in Illinois, he’s run the Superior Fall trail race in Minnesota and Pinhoti in Alabama. He’s also run a 100K in Wisconsin.  He’s also run several 50 milers. Finally, he’s collecting tickets for Western States, and anyone who has heard of that slightly challenging race knows that doing it requires a slight amount of ambition.

In addition to these events, locally this year, he ran the Shamrock Scurry, the Tails and Trails half marathon, the Paul Hoover Freedom Run, and he also did the St. George Island Sizzler. This is in addition to running every single Gulf Winds Track Club race to become the first runner in four years to accept and complete the GWTC Extreme Challenge. John ran every club race during 2022. When there was more than one distance, he ran the longest distance available at that event.

Now as far as being a model for those of us in the local community, if you were to see him at a local race, if he were to stand out at all, it would because he’s some guy coming to a race in a collared shirt and sandals.  Unless of course it was like Prefontaine or the Palace Saloon where he had some special outfit for it.

Before I formally met him, when I saw him in the middle of a race, he would tell me, “Good job runner,” or, “Way to go.” And I think that’s really indicative of who we are as a club, people supporting each other no matter how fast or how slow we’re going, even if we’re the best of friends or complete strangers.

The fifty-miler in Wakulla Springs was not his best race, and he should take pride in completing it, but he’ll be the first person to say that he is proud of his son Tommy fighting through the 50K just to go to his job later. Today is his wedding anniversary, so I’d like to apologize to his wife for this not being a romantic affair, but, hopefully, what I’m about to say will make up for it some. Ladies and gentlemen, please join me in congratulating John Baughman on being our Male Runner of the Year.