It is the Fastest 5K in Town, Let’s make it one of the Largest

I believe it is the fastest certified 5K course in Tallahassee. While the Palace Saloon 5K course has some much faster finish times to brag about, I think that has more to do with the nature of the fields of runners, than which course is faster. The Sickle Cell 5K race starts in front of the Jake Gaither Golf Course on Tanner Drive and runs a big rectangle (almost) through the Jake Gather neighborhood with a short uphill stint along Orange Avenue. With two minor exceptions, the course is flat. In addition to being flat, the layout of the course is perfect for running a fast race, breaking up into mental segments that are manageable. Many runners, myself included, have fond memories of fast times at this race, which has been an annual event since 1982, most often on the second Saturday in September. 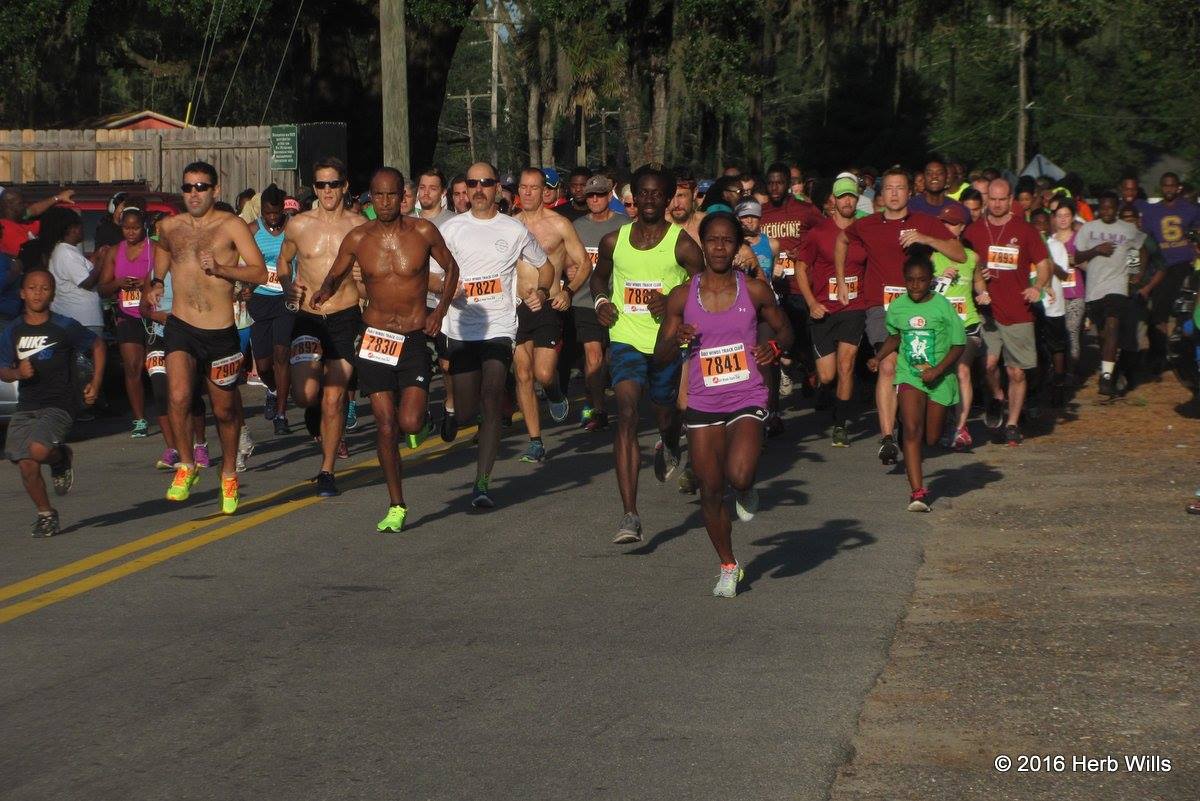 This past month, thanks to a lot of hard work by Paul Guyas and Jon Brown, the boards of the Sickle Cell Foundation and Gulf Winds Track Club created a partnership that will allow the Sickle Cell Foundation to focus more on fundraising, while adding the considerable resources and expertise in race management of GWTC and its members. The two organizations have worked together informally for many years.The race organizers recognized Tim Simpkins for all the work he had done for the race by naming the 1 mile run after him a number of years ago. I am excited to be able to call the Sickle Cell 5K one of the Gulf Winds races.

While the battle to eliminate Sickle Cell Disease is nowhere near over, great strides have been made. According to the National Institutes for Health (more specifically, National Heart, Lung, and Blood Institute), the average life span of a person with Sickle Cell Disease in the United States in 1973 was 14 years. That has now been extended to 40 – 60 years. Hopefully, working as a team, GWTC and the Foundation can contribute more than ever before to this cause, while at the same time giving a record number of runners a chance to run on a very fast course.

The NIH describes the Sickle Cell Disease as follows:

The term sickle cell disease (SCD) describes a group of inherited red blood cell disorders. People with SCD have abnormal hemoglobin, called hemoglobin S or sickle hemoglobin, in their red blood cells.
Hemoglobin is a protein in red blood cells that carries oxygen throughout the body.
“Inherited” means that the disease is passed by genes from parents to their children. SCD is not contagious. A person cannot catch it, like a cold or infection, from someone else.
People who have SCD inherit two abnormal hemoglobin genes, one from each parent. In all forms of SCD, at least one of the two abnormal genes causes a person’s body to make hemoglobin S. When a person has two hemoglobin S genes, Hemoglobin SS, the disease is called sickle cell anemia. This is the most common and often most severe kind of SCD.
Sickle hemoglobin can form stiff rods within the red cell, changing it into a crescent, or sickle shape. It loses its flexibility and can stick to vessel walls, causing a blockage that slows or stops the flow of blood. When this happens, oxygen can’t reach nearby tissues, and can cause attacks of sudden, severe pain. These pain attacks can occur without warning, and a person often needs to go to the hospital for effective treatment.

The NIH also states that the red cell sickling and poor oxygen delivery can cause organ damage. Over a lifetime, SCD can harm a person’s spleen, brain, eyes, lungs, liver, heart, kidneys, penis, joints, bones, or skin. It seems only fitting that a 5K race, where grabbing those big, lung filling gasps of air to enable one to run and endure as fast and as long as possible would raise money to fight this disease. I think it is an opportunity we can all be happy about, and just maybe collect some fast times running.

This year’s race will be run on September 9, 2017. GWTC and the Sickle Cell Foundation hope you will mark it on your calendar and join us we work together to run faster than ever to find a wawy to eliminate sickle cell desease .