The Run to Posey’s – Another Year of History

All seemed well this year as a group of maybe 30-35 runners gathered in the parking lot of the Rails to Trail station located just south of the intersection of Woodville Highway and Capital Circle Southeast, preparing for the Christmas Eve Run to Posey’s. The official start time was 7:30 a.m., but a half dozen or so runners left early hoping to finish the long run close to the time most runners would finish. Many others started in St. Marks at the trail’s southern end and headed north toward the Woodville station. At some point they turned around and returned to St. Marks. Other runners picked out spots along the trail to start their runs. And finally, a good number of cyclists rode up and down the course, encouraging the runners. The run follows along a 15.6-mile section of the Tallahassee – St. Marks Historic Railroad State Trail and keeps alive memories of places and times from before Florida was granted statehood.

The event however is a run, not a race and there is a lot of chatter among the runners on the trail who are free to run as much or as little as they want.  Actually, it is a Christmas Eve morning social event first, a run second. I estimate the crowd in the Riverside Café after the run to have been 50-60, close to an average number for a Run to Posey’s. 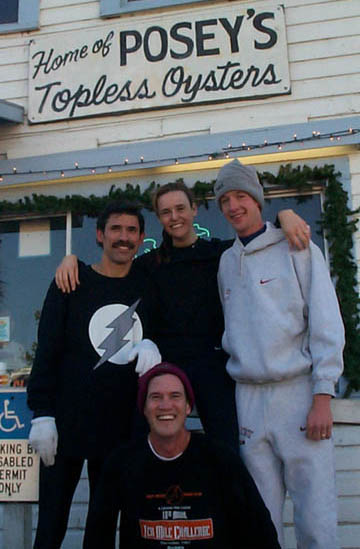 The trail has an interesting history, some of it not very friendly to runners or cyclists as many homeowners along the way made their displeasure with the idea of a protected trail known, sometimes scattering nails and tacks along the trail.  Long before that, however, in 1826, Tallahassee had developed a commercial trade industry that included cotton, timber and naval stores. Only two years before that, Tallahassee had earned the designation of capital of the Territory of Florida. During that same time, St. Marks was developing as a port town providing for the movement of goods down the St. Marks River and into Apalachee Bay.  A road was being built between St. Marks and Tallahassee, but the terrain was sandy in some areas and swampy in others making it difficult to pass through. Something better was needed and the idea of a train emerged.

The Tallahassee Railroad, located in Tallahassee, reportedly was one of the first operational railroads in the United States. In 1834 the company received a charter from the state of Florida to build a 22-mile line connecting the capital city with St. Marks. Things moved quickly and by 1837 the line was completed and in full operation.  The early trains were actually powered by mules. The railroad was extended to Port Leon in 1839, including the construction of a bridge over the St. Marks River. The mules gave way to locomotives in just a few years. Commerce was rolling.

However, in 1843 a wicked hurricane devastated Port Leon with a 10-foot storm surge and tidal wave. The new rail system leading into the city was destroyed as well. Port Leon never recovered from the storm and the train tracks once again stopped in St. Marks, despite the damage done there. Too bad, as it would have been fun finishing the Run to Posey’s after crossing the St. Marks River by bridge.  Apparently, the 1830’s and 40’s produced many strong storms assured that Port Leon would not return.

Hurricanes have played a destructive role in the St. Marks area many times. Located in the “corner” of Florida, hurricanes have found many ways of damaging the area. One report I read claimed that 58 hurricanes have impacted St. Marks since 1930.  All purported to have come within 150 miles of the town.

This year’s monster hurricane, Michael, reportedly sent another 10-foot wall of water smashing into St. Marks. In 2005, the winds hardly blew in St. Marks it seemed, but Hurricane Dennis pushed an enormous surge of water into the streets and buildings of St. Marks.  Many buildings survived, but many others did not. Among those that did not survive was the landmark for the city (and the Christmas Eve Run) – Posey’s Oyster Bar. Posey’s owners tried for a good while, but the damage from the flood waters and the cost of rebuilding made recovery too difficult and expensive. Finally, in 2011 the infamous establishment with walls and roofs covered with dollar bills was demolished.  There is plenty of good food in St. Marks, but no real replacement for the Oyster Bar with smoked mullet. So, on Christmas Eve morning, we continue to run to a place we once knew fondly and that brought us all together to dine on smoked mullet and oysters that had a special Christmas Eve flavor.

Sometime in 1983, the Seaboard Railroad stopped operating the line and filed to have the section of rail between Capital Circle and St. Marks railroad identified as abandoned.  Tallahassee runner, Joe Beckham immediately moved to organize a grass roots campaign to have the railroad bed converted into a linear park. In 1984, the Florida Department of Transportation purchased 16 miles of the corridor of the trail.  With Beckham’s guidance, the Tallahassee to St. Marks Rails to Trails Coalition was formed and Florida’s first “Rails to Trails” project began.

In 1986 Florida’s Governor and Cabinet passed a resolution supporting the idea and in 1987 the legislature appropriated the dollars to make it happen. It has been an economic benefit for St. Marks and other places along the way. Even those who once greeted runners and cyclists with nails and tacks, recognize the value the trail now brings. The “Rails to Trails” movement is alive and growing all over the state of Florida and the United States now providing thousands of miles of trails for families and friends to share and a lot of history to learn. Learning an area’s hurricane history is a good place to start!