Who Struck Paul Hoover and Why? David Yon

Who struck down Paul Hoover and why?

It glides through the night with less than a whisper of sound,
The only evidence of its passage,
The light mist sliced in half, dancing on air currents before falling to the ground
A life lived well and just, severed from its body.

There is no way to know who swings this ghastly tool,
Or why such a just man should be its target.
For in the brief moment the ghostly arms appear,
They complete their work, and are gone.

So quickly and thoroughly,
It takes only a moment
To find the mark and claim for the living,
Their spot among the dead.

And behind, without warning or explanation,
The destructive work of the scythe is complete; a life ended.

The grim reaper? The angel of death? Bad luck? Bad Karma?
They sit together at the corner of the bar; and mutter
“I don’t know what you are talking about.”
And act as if we just had a bad dream

Not so we scream, for gone from us,
With no chance to protest or defend,
The one we hold most dear.
Taken without so much as an evil whisper

Taken by The Scythe.

If it were based on merit, Paul Hoover most likely would live as long as anybody else out there and way longer than most. If it were based on the positive impact he had on those around him, he would not only be alive today, but certain to go another 33 years and pass the century mark.

But death knocks without warning sometimes and without reason. On May 23, 2017 Paul’s life, at least in one sense, unexpectedly ended. It happened, as it can to any of us, in a flicker of time. One moment he was doing something he loved – running a trail in the forest possibly trying to find the right words or work out to get one of his runners “over the hump,” and the next moment Wakulla High School needed a new coach. No matter how much we want to undo the tragedy and no matter how much we want to understand why it happened, neither has or will happen. 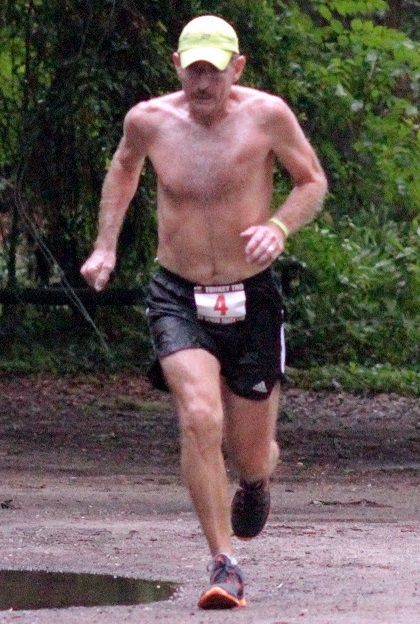 There is so much good that can and has been written about Paul Hoover. Like so many of the friends I have made through Gulf Winds, I cannot really remember the first time I met him; it seems like we have been friends all our lives though. He was a fierce competitor who ran with a little bit of that Prefontaine mentality: “The only way you are going to beat me is to hurt.” He was a good pacer, not a front leader like Pre, but he would punish his competitors with a strong pace, crushing them before they reached the “kick zone.” His races with Bill McGuire were legendary. Paul would always try to punish Bill early to make sure he had surrendered before the last stretch. Bill’s goal was to stay as close as possible and start closing as well as possible and make it a kicker’s race. If Bill could see the finish and Paul was in reach – it was usually not good news for Paul.

Paul always had this straight-ahead approach to life. Commit yourself to whatever it is you are doing, learn as much as you can about it, and then work hard to be your best at it – go the extra mile. That meant never accepting less than your best, but it also meant that if you gave your best, then accept the results with grace and dignity.

Paul knew success most of his life. His love for the outdoors made him a great steward and benefited all of us. In 1977, Paul Hoover was recognized as Florida’s Wildlife Officer of the Year. It was the beginning of a career that has personified excellence, commitment to duty, character, productivity, good judgment, and most of all, leadership. In 1979, he was promoted to Leon County, where he served with distinction as Sergeant and Lieutenant over a four‐county area. After retiring from the Florida Fish & Wildlife Conservation Commission, he received the Guy Bradley Award for Outstanding Leadership and Professional Excellence. He was the GWTC runner of the year in 1993 and together with Myrna, was selected to receive the Cleveland Caldwell Advancement of the Sport Award. I have no doubt he will be in the Hall of Fame very soon.

But none of that is what really made Paul so special. Sometime ago, Paul Hoover and Myrna Unger (at the time) became friends and eventually husband and wife. Myrna simply brought out the most special sides of Paul. And then, about 10 years ago she convinced him he should take on the coaching job at Wakulla High School. Paul started in 2006, as I recall, mostly to help the coach at the time David Price, who was losing a fierce battle to ALS (Lou Gehrig disease.) David’s son, Tyler, was on that team. The way he dealt with all of the challenges that year, might just be the best job of coaching he ever did and a great look at why the kids who ran for him loved him so much. When David Price lost his battle in November of 2007, he had watched Paul guide Tyler to one of the best seasons in Wakulla High School history, including a Chenoweth Cross Country Athlete of the Year Award. And Tyler has not forgotten.

Since that day hundreds of high school athletes learned many valuable lessons about how to tackle life’s challenges. Many become very good runners; all of them became better human beings. Paul Hoover has developed (or maybe he always had it) a wonderful way of interacting with people that made him the perfect high school distance running coach. His first move was almost always to try and put everyone at ease. Those who knew him, knew you could trust what he said completely, with one exception. When he started telling you it really wasn’t him, the easy thing was to nod and say “sure.” But we all knew he had an almost magical way of making us all feel a bit better and willing to go that extra mile to make this world a better place.
It is our job to make sure that legacy lives on for a long time.