When I tally the pluses and the minuses of knowing Bill McGuire for more than 35 plus years the pluses are so far ahead of the minus, I shake my head. (He may not think the same way, however; by now he has learned when I say, “hey, Bill,” he should run away fast.) You would have

a very hard time finding anyone who would disagree, as he is always there to help. And yet, as we celebrated his 70th birthday last week, I knew that much of what he does goes unnoticed.

Of course, someone should quickly take issue with that statement because Bill was the 6th person inducted into the GWTC Hall of Fame, the only male elected Runner of the Year twice (Jane Johnson was the only woman), the winner of the Cleveland- Caldwell Advancement of the Sport Award, and an active member of GWTC since its inception. 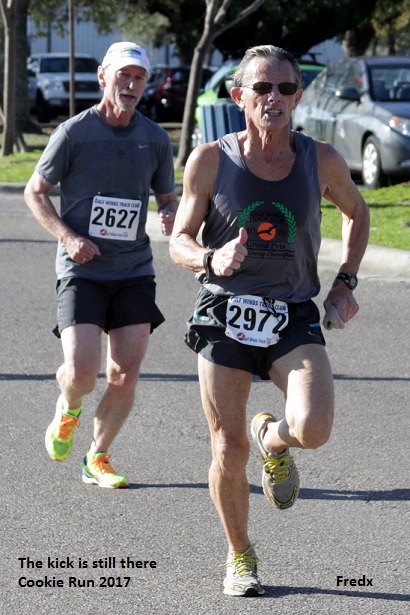 But the last award came in 2007 and you could very easily miss all the help and positive things he does every year to make sure an event goes off well. That is because, except for drawing maps of race courses, he goes to work on a project and his focus immediately becomes how to get the job done correctly, not who will get credit for getting the job done. He is a key reason the club has such a commitment to excellence.

I encourage you to read an interview that Martha Haynes did with Bill McGuire in the fall of 2003. Bill, a founding member of the club, had already run 27 straight Tallahassee Springtime 10K’s (a streak that is still going), when Martha asked how he thought the club had changed over time. After listing a number of changes, Bill went on to say, “One thing that remains the same is the club’s commitment to excellence in staging its events. From the start, there was an emphasis on well-organized races. Accurate, safe courses, correct results, etc.”

That commitment to excellence usually starts with making sure the race course is certified and accurate. Essentially, that means measured following the guidelines of the USA Track and Field procedures. These are tedious, time consuming procedures that help make sure a course is accurate. Bill has certified more than two hundred races.

Bill has always been an outstanding athlete. For a while, I thought of him as the embodiment of the Satchel Page line “how old would you be if you didn’t know how old you were?” Into his 50’s he tracked much younger runners down, running patiently in the beginning of a race, gradually building steam and then rolling home with a strong closing pace, his last mile most likely his fastest. There were times when another runner would challenge him as they both unleashed their finishing kicks. It was almost always a mistake. With that workman like precision, Bill would pump more energy into his legs, quickening his already strong pace, until a booster rocket fired and he was gone. Race over. At the age of 51, he ran 16:38 (5K) and 35:44 (10K). But, alas, of late his body has him swimming in the pool more than running.

His most impressive PR to me though was how long he maintained his patience, dedication and love for the kids at Gretchen Everhart School. The special needs kids at this school would say and do almost anything when he would take them out in public. Bill knew just how to take it in stride, calm the situation, while explaining why someone should not be offended by the obscene remarks of the 14-year-old child.

Bill retired from teaching in June of 2014, but he left a great legacy at Gretchen Everhart. He touched and improved many, many kids lives. The Owl Run was just one way. It would have been easy to skip Everhart on the middle school cross country circuit as the school does not field a formal team and hosting is a lot of work. Instead, however, it is an annual event and the Everhart kids start with their own race of approximately a half mile. A moving event, there has always been a partnership between GWTC (led by Ray Hanlon) and Gretchen Everhart School. Every year Florida High’s football team comes out to run with the Everhart kids, encouraging each child to overcome their challenge and make it to the finish line.
Again, Martha Haynes’ comments in 2003:

Indeed, Bill McGuire, one of Gulf Winds Track Club’s founding members, was truly born to run. …[But] Bill is far more than a remarkably good runner. You don’t have to spend more than a few minutes in the vicinity of Bill, to sense his warmth, enthusiasm, and the electric current of raw energy that surges from him. His knowledge is encyclopedic and his recall legendary. Dubbed “Radio Head” by former GWTC president David Yon, McGuire can recite (or better yet sing) the lyrics of every song he’s ever heard, even if only once. A musician since grade school, Bill has sung and played solo and in bands throughout his life.

Bill’s response: “I don’t ever WANT to grow up…can’t you tell? I run and swim and ride bikes, play guitar and sing in bands. …. I’m trying my best ‘to stay… forever young.’” So maybe Satchel did know what he was talking about.

Bill is the last to tell you about all the things he does for everyone else. But be assured, he has made our club special and works constantly to keep it that way. I will never forget standing with him in the middle of Tram Road next to the Leon County Fairgrounds, wondering if we could create a Thanksgiving Day race in Tallahassee. He has never been called race director, but I assure he has been there ever since that day in 1992.

Enjoy number 70, Bill. Many thanks for many years of service!