Another Step Towards Closure 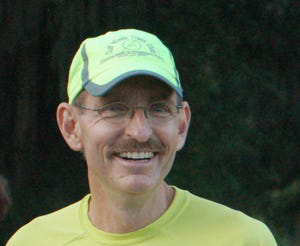 Another Step Towards Closure

​It glides through the night with less than a whisper of sound.
The only evidence of its passage,
The light mist sliced in half, dancing on air currents before falling to the ground
A life lived well and just, severed from its body.

There is no way to know who swings this ghastly tool,
Or why such a just man should be its target.
For in the brief moment the ghostly arms appear,
They complete their work and are gone.

I do not remember how I heard the news. But I do recall my anguish as to how such a good person could be gone without any hint or warning of what was coming. On May 23, 2017, Paul Hoover traced steps he had laid down many times before along the GF &A Trail in the Apalachicola National Forest. As he approached Springhill Road, I am sure he had some thoughts about getting home. I do not think he ever knew what happened as Jarvis Strickland crested a hill going at least 89 miles per hour in his Toyota Camry.

We run for our health in large part, so how could this happen?  We run to clear our minds and hearts.  How then can this happen?

After four years of waiting, it appears Paul Hoover’s family is finding peace and justice at last.  The defendant, Jarvis Strickland entered a no contest plea to charges of vehicular homicide, leaving the scene of an accident, arson and tampering with evidence. Below is an interview with Myrna Hoover, Paul’s wife, who was also responsible for a lot of his “character development.”

“As much as we wanted someone to be arrested and charged with the death of Paul, we had faith in the law enforcement community and Corporal Hunt of the Florida Highway Patrol. Corporal Hunt kept me informed every step of the way while trying to protect our family from the terrible details of the day of Paul’s death. We were grateful for the first responders and for Russ Murray, the witness and first person on the scene. Russ was also an EMT and we were relieved that if anyone could have saved Paul’s life the right person was there.

While I know the anger of Paul’s death and the wait for justice was hard for my children, for me, from day one, I knew nothing would bring Paul back and my grief was so all consuming I could not afford to focus on hate even though I wanted resolution.

Through four long years, my family and I have worked with 3 assistant states attorneys, 3 judges and the accused has had 3 different defense attorneys. This certainly in not what was guaranteed   by the legal system Paul so fiercely loved and defended. The pain of losing someone you love is enough for any family to bear, but the length of anguish to get to a resolution compounded the hurt we felt.”

“All along, we were surprised Jarvis Strickland didn’t take a plea deal. Our hope, my hope, was that he would accept responsibility for his actions and show real remorse. My children, friends and others wanted him to receive a sentence appropriate for his actions. I am relieved that he changed his plea to no contest and if the Motion in Limine holds then my children will not have to experience the pain of a trial. I unfortunately was prepared for the trial, appropriately so, by the state attorney’s office and endured seeing the pictures of both Paul at the scene and those of the medical examiner. Nothing can change that knowledge and no wife, daughter, son, friend or other person should ever have to know that pain and picture. Loved ones should be remembered for the way they were and the love they shared.”

“I am grateful to Beville and Fox who found the case law to file the motion. I do not believe the appeal will succeed. Believing anything else gives the defense the power and I refuse to give them that.”

“When you find that person you have been searching for your whole life who enables you to wake up every morning and go to bed every night knowing you are loved, and that you love them in the same way…you realize you grabbed the brass ring. I was married to my best friend. I want people to know and remember who Paul was. He was a loving father to a wonderful daughter and two sons and a daughter in law. He loved his three grandchildren immensely. The kids he coached at Wakulla High School were not just his athletes they were his adopted children and just like his own children, he was proud of them. He was a man of integrity and honor; he held himself to a higher standard and made us all better because we knew him.

Paul was also proud of his career and his work with the Florida Fish and Wildlife Conservation Commission and the Wakulla County Sheriff’s Office. The people at these agencies were his work family and more. Gulf Winds Track Club, the people, the sport… gave him one of the greatest loves of his life. Except for his faith and family-running was his love. While we lost Paul too soon, he died doing what he loved – running.”

While a plea of no contest does not totally wrap this matter up, sentencing is scheduled for September 15, and it appears to be getting close. The guidelines suggest the sentence should be between 15 and 65 years.

There is no way to bring Paul back.  But he will live on through his family members, friends, coworkers, running community and students. Personally, I want people to remember Paul for the way he lived his life. Paul always had this straight-ahead approach to life. Commit yourself to whatever it is you are doing, learn as much as you can about it, and then work hard to be your best at it.

That meant never accepting less than your best, but it also meant that if you gave your best, then accept the results with grace and dignity. He often told the kids he coached – “Go the extra mile – It is never crowded.” That last quote is now enshrined in the Welcome Board to the Paul Hoover Track and Field at Wakulla High School.  There are many other ways whereby Paul will be remembered, but none better or more appropriate than this one.

​There should always be a reason to smile, even if we have to look around a bit to find it. The Gulf Winds Track Club (GWTC) Annual Awards Ceremony provided plenty of reasons to smile on Sunday, January 9, 2022, when the club held its Annual Awards Presentation at the...

Two Years One Closes Another Opens

Once upon a time, a long time ago, the end of one year and the beginning of another was a time to be happy and reflect on the joy in running and look forward to good things in life.  It was a time to pat each other on the back for past achievements and to plot new...

A View from the Top – Searching the Heart

This man killed my friend. He chose to drive on Springhill Road in this county one fine evening at nearly 90 mph if not faster, for reasons he will not share, crossed the centerline in an out of control skid, and struck Paul who was standing on the opposite shoulder...

Gulf Winds Track Club and Tallahassee have had some outstanding women runners. Katie Sherron is certainly among the best to compete. The Apalachee Regional Park has hosted some top-level competitions including the USATF Club Cross Country Championships run on Dec. 11,...

The GWTC 10K Series will be back in 2022, but with a slight change. In the past, the Club would select a number of local 10K races and provide an award to members who completed a certain number of them. For 2022, however, GWTC members can select the races for...

Mark your calendars now for the annual Run to Posey’s on Christmas Eve! As most of you know, this tradition has been around for more years than most of us can count and has continued long past the demise of Posey’s Oyster Bar back in 2005 when Hurricane Dennis rolled...

It has been a long time (20 years) since either Mary Jean or I have not spent time on Esplanade Way in the SouthWood State Office complex on Thanksgiving morning. Turkey Trot has a cadre of dedicated volunteers who can say the same thing, as can hundreds, maybe...