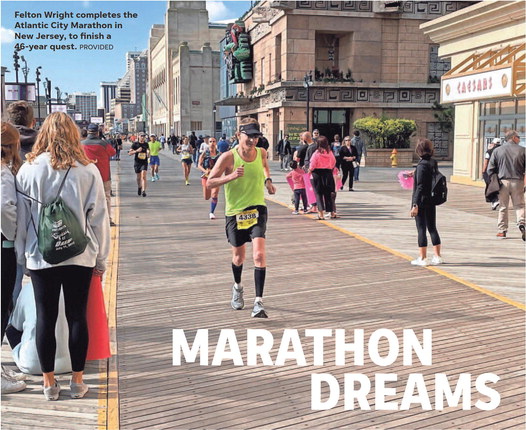 ​“There he is,” someone shouted. I think Bonnie Wright was the first to spot him. Sure enough, I could see that little left-right sway making its way toward the finish line of the Atlantic City Marathon in the state of New Jersey. The end of a 46-year journey.

Felton Wright was about to complete a marathon in his 50th state on Oct. 17, 2021. A very impressive accomplishment and a very long journey. A total of 1,320.95 miles that began in the state of Louisiana in the city of New Orleans when he was 17 years old. The logistics of finding and running 50 marathons in 50 different states is a tough challenge, made even more difficult in the shadows of the COVID monster.

“Run with him, run across the finish line,” I heard Bonnie say. “I don’t think he would want that,” I responded. It was his moment. But then I found myself cheering him on as I jumped on to the course and ran with him for a short while. That ended though when I asked, ‘How are you feeling? “I can’t talk, he responded.” 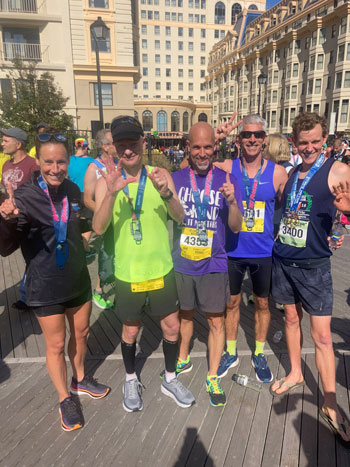 I asked Felton for his thoughts on this impressive venture.

Q. When did you run your first marathon? How old were you?

A. In 1975 I ran the New Orleans Marathon at age 17 (way too young). Jeff Galloway was the only person I knew who had run one at that time. A high school friend of mine, Stephen Hodge, drove to New Orleans with me to run it. We had no idea what we were getting into. (Note – finish time was 2:59:33)

Q. How many marathons and ultras have you run? More than 50, I guess.

A. I checked. I have run 65 individual marathons. 3 full Ironman Triathlons with a marathon, and 2 50ks.

Q. When did you start thinking about running in all 50 states? When did it become a firm goal?

A. About 10 years ago when Ron and Cynthia Christen completed their 50 states quest. It inspired me. I think I had about 15 states at the time. Ron has given me great advice since then. I have also met many others from around the country that have or are trying to complete it. The journey has been more important than the goal. I have been blessed to be able to travel to some interesting places with friends to run marathons.

Q. Which marathon effort was the most fun, which was the hardest, and which one was your favorite?

A. The hardest marathon was Pike’s Peak because it was a trail marathon that ran up to 14,000 feet and then back down. My favorite has to be the 1986 Tallahassee Marathon which I won, on Valentine’s Day, and then

Q. When and where was your “darkest hour’?

A. It was 4 weeks ago. I ran the Sandia Crest Marathon in New Mexico which started at 10,000 feet and came down for 13 miles. My quads were destroyed by mile 4 and it was a struggle to finish. Every step hurt.

Q. Did COVID impact your schedule in anyway?

A. Definitely! I was on the way to the airport in March of 2020 to go run a marathon when I received a text that the race was canceled. For almost 1 1/ 2 years all marathons were postponed and or canceled due to COVID.

Q. What would you tell someone who is trying to decide whether to do 50 states?

A. Enjoy the journey! It will take you to places that you never dreamed of visiting or running. You will meet some incredible people, and discover we live in a great country!

A. A good friend reminded me several hours after finishing my 50th state

that I should do all 6 of the major marathons. I have already done 3 of them. So, I have London, Berlin, and Tokyo on the list now. I also want to go back and run the New Orleans Marathon again in 2025 which would be 50 years after my first one there.

One of Felton’s great gifts is his ability to get people involved in the sport of running and show them how to enjoy it. He was named Runner of the Year in 1985 and along with his wife Bonnie and son Jamie was named Co-Race Director of the Year in 2001.

Finally, in 2004 he was elected to the GWTC Hall of Fame joining his father, Leitch Wright, as the only farther-son team in the Hall of Fame. He inspired three people (Jillian Heddaeus, Carter Hay and Allen Blay) to run their first marathon and one (Chris O’Kelley) to run his third marathon in Atlantic City.

I had to laugh when I saw him identify the 1986 Tallahassee Marathon as his favorite. I am sure the main reason it goes to the top is the fact that Bonnie accepted his marriage proposal. But I remember it a little bit differently. Felton mentioned he won the race, and he did so in a time of 2:40:57. It was my second marathon, and I was trying to qualify for Boston – which meant I had to run under 2:50.

As soon as he crossed the finish line he hopped into a car and came back looking for me. Somewhere along the way his watch or his math betrayed him, and he was convinced I was behind the necessary pace to qualify. I either needed to push harder or forget qualifying.

So, despite the fact he had already finished the race he was climbing out of the car and running beside me around the 24-mile mark. Marathoners and math are poor companions. Eventually, we figured out my pace was fine, and I had almost 2 minutes in the bank. Only then did Felton take his weary marathon legs and put them back in the car.

Featuring Eric Draper, former Florida State Parks Director and accomplished water, wildlife and climate advocate. Learn the latest on this important topic, and ask questions about what we can expect in Tallahassee's future. When: Tuesday, November 15, 2022 at 6PM...

Does it get any better than this? Not really, if “this” is the Pine Run 20K at Tall Timbers on October 8, 2022. With a starting temperature of 61 degrees, a carefully manicured trail for runners, bright blue skies to spiff up the lake, forests and fields and Bill...

Increasing evidence supports a link between vigorous physical activity and a healthier brain, with regular exercise helping to delay brain aging and, perhaps, reduce the impact of neurodegeneration on people. But the headline in the daily publication Parkinson’s News...

Gearing Up for Turkey Trot & BRG

The Tallahassee Turkey Trot is just around the corner.  Last year was a good step away from the cancellation caused by COVID - 19 in 2020, but we want to see more this year. Once again, the race will feature 4 distances – “The Turkey Gobbler 1-Mile Race,” the “I have...

​ That's three races in the books in Gulf Winds Track Club's 2022 Summer Trail Series. Just one to go! Here's what happened in the penultimate event, the Maclay Gardens 9K on 16 July 2022: "Leonardo Canete and Andi Vilardo each get a third Trail Series win at Maclay...