Parky – You are no friend of mine

thought I had managed everything well for the 2019 Palace Saloon 5K on Saturday (April 13).  Most importantly, I had plenty of time to warm up. Special thanks to race director, Mark Priddy, and registration coordinator, Jeanne O’Kon, for that opportunity.  For the last several years it has been hard to get that warm up in and that, in turn, meant it was hard to run the race well.
My Springtime Tallahassee 10K race on March 30 had gone as well as any race I have run in years. And while last week’s 5K race was disappointing, I was confident I could run the Palace 5K well.  The weather was warm, but still good for running a fast 5K as the top two runners ran 14:39, the fastest finishing times since 1986. (“Well” for me was defined as 23:00 to 23:30 minutes.)

April has been designated by many as Parkinson’s awareness month.  Parkinson’s is one of the most complex, difficult to diagnose and, so far, impossible to cure diseases.  But there are many ways to manage symptoms and improve the quality of life for someone with the disease. And it is well worth pursuing them. I received my official diagnoses in October of 2012.  It is extremely important that those who have Parkinson’s are treated by doctors who understand the disease and are willing to invest the time to keep up with changes in treatment options and how those options affect specific individuals. It may have become somewhat a cliché, but it is true that if you have seen one person with Parkinson’s Disease you have seen one person with Parkinson’s Disease. The variation is surprising. However, one piece of advice that applies across the spectrum and that is to keep exercising. Mark Priddy has very graciously agreed to donate a large portion of the race proceeds to the Tallahassee Parkinson’s Outreach Association for the Rocky Steady Boxing program the group supports.  It is a great way to get started with exercise and keep going.

As you can imagine, I have taken that advice to exercise as far as I can, including running every mile I can. But I have to admit, sometimes it just seems harder than it ever was before.  Sometimes it is really hard to decipher what impact Parkinson’s has on my running efforts. Maybe it is just the impact of aging and of simply not being as tough.

The road behind the start line is packed. When you look around the start of the Palace Saloon 5K at Messer Field you see many young, sleek, fast, bodies.  They are made to fly and two of them, David Barney and Ricardo Estremera, will just miss becoming the all-time fastest for this race when they run across the finish line in 14:39.

Shortly after Mark Priddy’s command to start the race, a mass of humanity begins to move, stops for a few seconds and then moves again.  Gradually, I can stretch out. But as soon as I begin to move freely, I feel a suffocating pressure wrapped around my lungs. I see Parky, chuckling while he stares back at me. I can hear him, “No one wins this battle.” I push on and see the pace on my watching dropping closer to what I was hoping for.  I cross the mile mark behind, but not so far that I can’t still finish well if I can just find the right rhythm. I push on.

It is not going to be a good day. I start thinking of what it will take to maintain my pace over Mt. Jackson Bluff and to the finish line.  Dang, that thought creates a needless dose of anxiety that just makes everything else harder. That is one of Parky’s specialties – creating anxiety. So, I remember the mantra – slow a bit and try to relax. Find the rhythm and then push. It worked, at least for a short time.  I began to push the pace again and rounded the corner. Another quarter mile or so and the heavy weight returned to my shoulders. I tell myself to relax but this time it doesn’t work. And before I can tell myself not to, I find myself walking and thinking I will just “jog this one in.”  I can’t really tell you what flipped the switch and made me start reaching for the white surrender flag.

It seems one of the more common topics in the Parkinson’s literature lately has been the interaction of Parkinson’s and shortness of breath or Dyspnea. The possible ways they are related include the “wearing off of levodopa (a key medicine for treating other symptoms),” motor complications, anxiety, depression, heart stress, diminished physical skills, and other similar factors.

On this Saturday the quick walk break seemed to break the downward spiral and give me a chance to reset my body.  While Parky thought his time had come and reached out to pull me off the course, I quickly started running again having walked no more than 10-15 seconds. I wish I could say I blazed to a fantastic finish and a super time.  But that would be fiction. 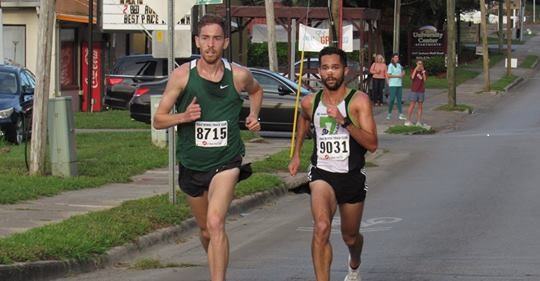 However, I did experience one of those rare moments that make running – even if Parky is trying to spoil it – special.  The third and last mile on the course has a tough uphill and then a longer than expected downhill and finish. I can’t remember all the details but somewhere climbing up that hill I fell into step with Leah Kiros. Leah is 13 and a very talented runner and student. We began encouraging each other and in fact finished with the same gun time.  I am sure she could have left me far behind, but instead she helped drag me across the finish line and reminded me why it will take something more than shortness of breath to make me leave this sport!